On the eve of Teacher's day, the Ministry of Skill Development and Entrepreneurship honored 53 trainers from diverse backgrounds with the Kaushalacharya Awards for outstanding contribution in creating a future-ready and skilled workforce. The ministry further announced that Kaushalacharya Awards will become an annual affair. 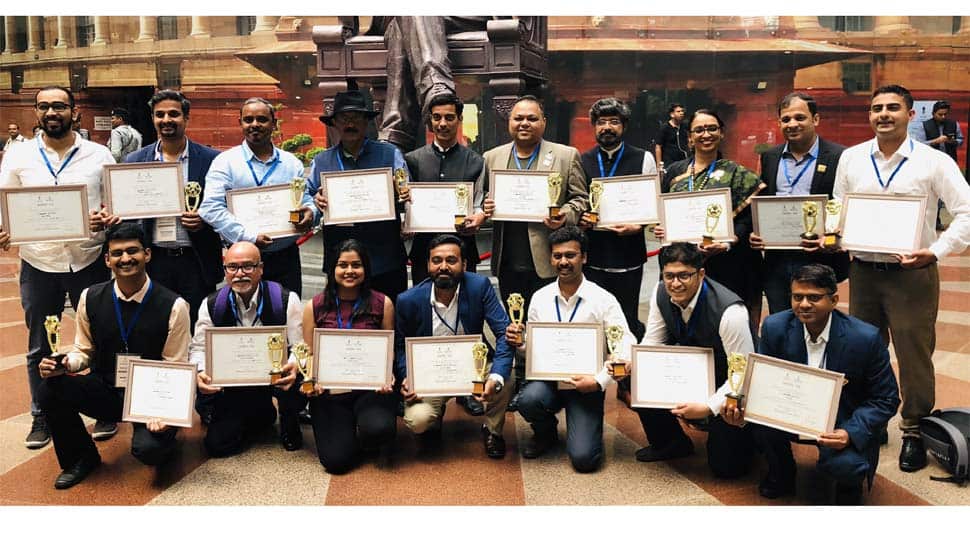 NEW DELHI: On the eve of Teacher's day, the Ministry of Skill Development and Entrepreneurship honored 53 trainers from diverse backgrounds with the Kaushalacharya Awards for outstanding contribution in creating a future-ready and skilled workforce. The ministry further announced that Kaushalacharya Awards will become an annual affair.

In a bid to motivate and incentivize more trainers to join the Skill India Mission, the Ministry had organised Kaushalacharya Samadar 2019 to felicitate trainers from different sectors.

“A total of 53 trainers from diverse backgrounds including experts of WorldSkills Competition winners, trainers from National Skill Training Institutes (NSTIs), Industrial Training Centres (ITI), Jan Sikshan Sansthans (JSS) and trainers from reputed Corporate houses were honored at a gathering of government and industrial experts held on the occasion of Teachers’ Day by Skill India,” said a release from the ministry.

On the occasssion of Teacher’s Day, Skill India recognised the commitment & hard work of the experts who trained Team India for @WorldSkills 2019 in Kazan, Russia. It is their persistent effort which made India proud at the biggest international platform 4 skills. #AbSkillsKiBari pic.twitter.com/7pEILdiRzr

“By 2022, it is estimated India will need about 2.5 lakh trainers across the skilling ecosystem. National Skill Development Corporation (NSDC) and Directorate General of Training (DGT) are working together to create better quality trainers and assessors. To ensure standardization of training and learning, MSDE is working on creating world-class academies and putting in place rigorous accreditation processes. The Ministry of Skill Development and Entrepreneurship has introduced programs to for effective utilization of capacity and infrastructure across the network of NSTIs to achieve greater convergence between long-term and short-term skill ecosystem. Organisations like NIMI, NSTI, Central Staff Training and Research Institute (CSTRI) are working closely toward strengthening of trainers,” added the release.

Speaking at the event, Skill Development Minister Mahendra Nath Pandey said, “The Guru-Shishya parampara has been a unique feature of ancient Indian civilization where our teachers imparted life’s lessons and skills to disciples. On this day, we honour our trainers who have imparted their learning to the youth and helped in moulding their careers. In order to motivate and recognize their contribution to the skilling ecosystem, I am happy to announce the Kaushalacharya Awards an annual ceremony to celebrate the teachers who are pillars of the Skill India edifice. It is only fitting that we honour our own Guruswho the global community has already recognized by showering rich accolades on skilled Indian youth at WorldSkills International at Kazan, Russia, a week ago.”

“Industrialisation in India had for long been hamstrung by a dearth of skilled manpower. The Skill India Mission has addressed the need for an equipped and skilled workforce. We are looking at introducing degree programs for trainers to boost technical education and vocational training in the country. Today’s event marks a special day where we celebrate all those trainers who have helped thousands of youth, and inspire many more technically equipped and experienced people to join the Skill India Mission,” said Raj Kumar Singh, Minister of State, Ministry of Skill Development and Entrepreneurship.

A special workbook aimed at building a meaningful learning experience for students was launched by the DGT. The book has been developed by the National Instructional Media Institute (NIMI), which designs and develops books and study material for ITIs. Representatives of Tata Strive, Quest Alliance, Mahindra Pride Class Room and NIMI attended the event where MSDE recognized their contribution to the workbook.

A manual of Standard Operating Procedure (SOP) was also launched to boost training of trainers and assessors. The SOP provides instructions on how to implement and adhere to processes, frameworks and systems specified in the ‘Training of Trainers and Assessors Guidelines for Short-term skill development programmes’.

An MoU was also signed between DGT and Dhanbad-based Kaushalya Kameshwar Techno Solution Pvt Limited under which training will be provided in Industrial environment in mining sector courses.

At theWorldSkills Competition 2019 in Russia on August 22-27, India won a gold, a silver, two bronze and 15 medallion of excellence and ranked 13th among 63 countries.