'A girl is born sealed from birth until it is opened': Jadavpur University professor sparks row with 'virgin wife' comments

Sarkar in his controversial post wondered why somebody would be "willing to buy a broken seal while purchasing a bottle of cold drink or a packet of biscuits?" 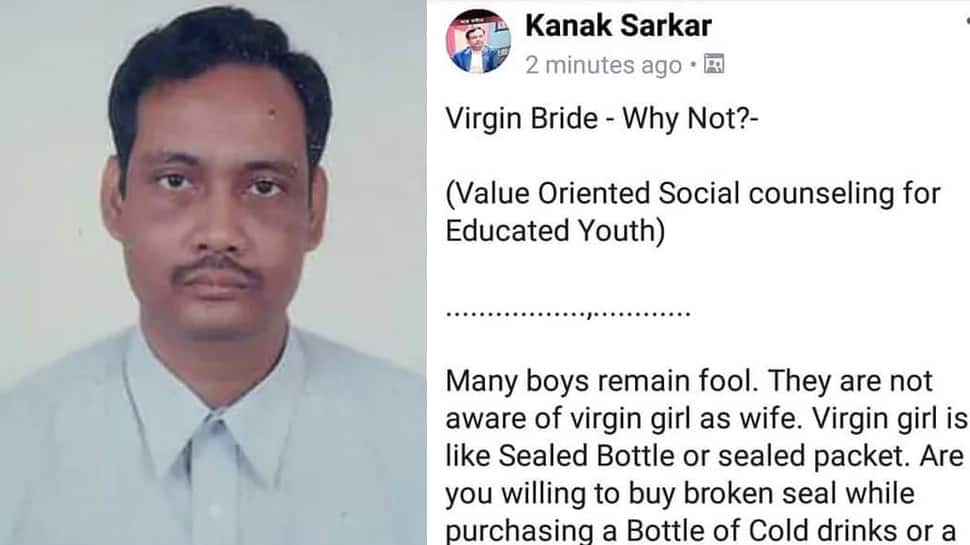 KOLKATA: Jadavpur University professor Kanak Sarkar is facing attack from all quarters for making a controversial comparison of a virgin girl to a sealed "bottle of cold drink or a packet of biscuits". He also termed the boys who do not know about their wife being a virgin as 'fools' and asserted that a "virgin wife is like angel".

Sarkar in his controversial post wondered why somebody would be "willing to buy a broken seal while purchasing a bottle of cold drink or a packet of biscuits? A girl is born sealed from birth until it is opened... A virgin girl means many things accompanied with values, culture, and sexual hygiene," he said in his post. He added that "to most boys, a virgin wife is like an angel."

A professor of International Relations, Sarkar also stressed on celibacy and virginity as part of ethics and morality in a Facebook post. Facing flak on social media, the professor deleted his post. However, he also maintained his stand stating that he has 'freedom of speech'.

"Supreme Court has repealed section 66 A of IT Act and given freedom of expression in Social Media. When Taslima Nasrin wrote against a particular religion we supported her Freedom of Expression... I have not written anything against any person, individual or anybody without any evidence or proof or any reference," he said in another Facebook post.

His post was shared widely on social media with netizens calling him out.

So much for being professor of jadavpur university.

This gentleman here, Jadavpur professor Kanak Sarkar, has now compared virgin women to "sealed bottles". He argues that men shouldn't want anything less than virgin brides, just like they wouldn't buy a bottle or a packet with a "broken seal".

This. Remarks by a professor of Jadavpur University @JUFET
People like him 'teach' and mould our future. This is what we want to be taught? pic.twitter.com/cwLYLVSgPD

Taking note of his controversial comments, the university has promised to take action against him. "I was not there. I have returned last night. We will take all steps as per law," Jadavpur University vice chancellor Suranjan Das said.

The National Commission for Women has also asked the West Bengal Director General of Police to investigate and take appropriate action in the Jadavpur University professor for giving "misogynistic" lessons to his students.