Seeking an end to the controversy over Bhagawad Gita near A P J Abdul Kalam's statue, the late president's family on Sunday placed the Quran and Bible beside the wooden statue. 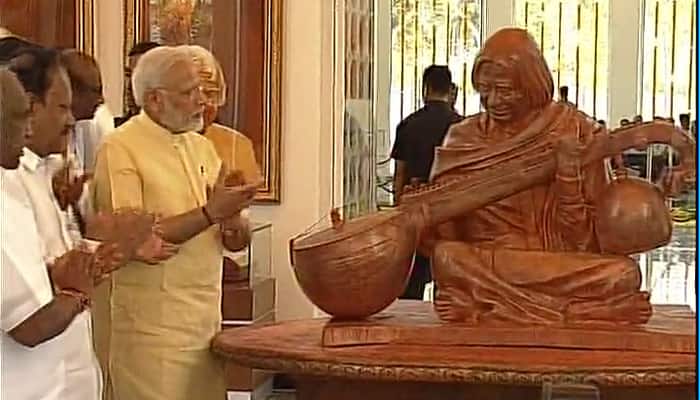 PM Modi had inaugurated the APJ Abdul Kalam Memorial at Rameswaram in Tamil Nadu on July 27 (ANI)
Share:
Written By:

Rameswaram: Seeking an end to the controversy over Bhagawad Gita in the A P J Abdul Kalam Memorial, the late president's family on Sunday placed the Quran and Bible beside the wooden statue.

The controversy erupted after a copy of Bhagwad Gita appeared beside the statue of Kalam -- playing playing the 'veena' at his memorial in Rameswaram -- right before its inauguration by Prime Minister Narendra Modi.

PM Modi had inaugurated the APJ Abdul Kalam Memorial at Rameswaram in Tamil Nadu on July 27 on the death anniversary of the late President.

Protesting the development, local Hindu outfit claimed that “no permission was taken” to place the holy books – Quran and Bible – there.

Meanwhile, Vaiko-led MDMK and the PMK questioned why the Bhagawad Gita was placed alongside the statue of Kalam.

Calling the controversy unnecessary, Kalam's relatives Sheik Dawood and Salim told PTI, "DRDO officials worked tirelessly for the memorial construction and had not sculpted the Bhagavad Gita near the statue with any (ill) intention. Now we have left two books – Quran and Bible near the statue".

They said Kalam was a leader to all Indians and no one should seek to politicise the issue.

Both MDMK and PMK said they would also place a copy of Tamil treatise 'Thirukkural' near the statue soon.