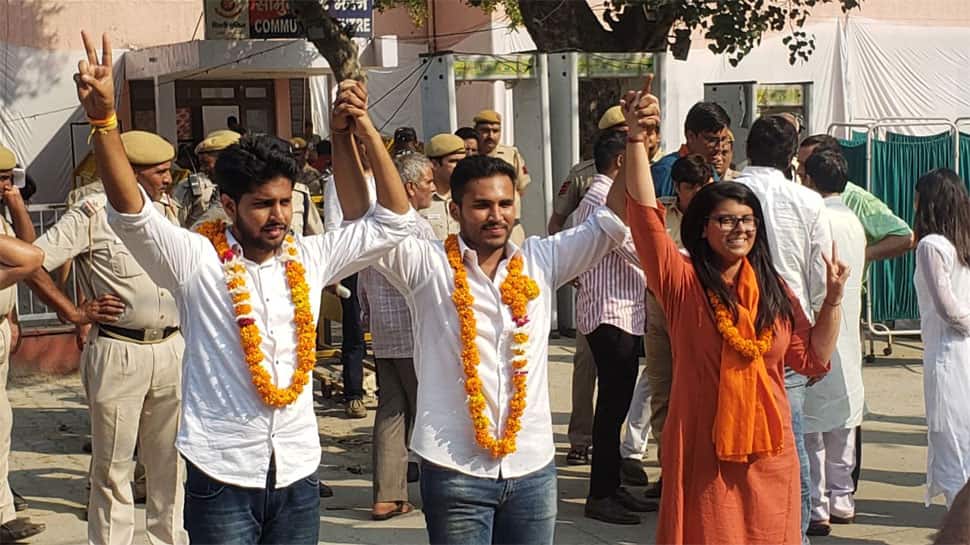 ABVP candidates Akshit Dahiya, Pradeep Tanwar and Shivangi Kharwal got the maximum votes for the post of President, Vice-president and Joint-secretary, respectively. The lone winner from NSUI was Aakash Choudhary, who managed to trump his opponent for the post of DUSU secretary.

ABVP`s presidential candidate Akshit Dhaiya received over 29,685 votes against 10,646 votes garnered by Chetna Tyagi of the NSUI. For the post of vice-president, Pradeep Tanwar of the ABVP defeated his closet rival Ankit Bharti by a margin of 8,574 votes. Tanwar received 19,858 votes.

Reacting to the results, NSUI state president Akshay Lakra said, the ABVP had fielded Rathee, Ramjas College president during the violence there in 2017. "The students have given a clear mandate against violence," Lakra said.

Union Home Minister Amit Shah congratulated ABVP for its sweeping victory in the DUSU polls. "I congratulate all workers of ABVP for the grand victory in Delhi University student union elections. This victory is not only proof of the unflinching belief in nationalism of our youth but also a proof of how committed new India is towards nation-building,'' Shah said.

This year, 16 candidates were in the fray for the four DUSU posts -  president, vice president, secretary and joint secretary- which form the central panel, and are elected for one year.

The RSS-affiliated ABVP had fielded Akshit Dahiya for the post of DUSU president, Pradeep Tanwar for vice-president, Yogit Rathee for general secretary and Shivangi Kherwal for joint secretary.

The NSUI, the student wing of Congress party, pitted Chetna Tyagi for the post of president, Ankit Bharti for vice-president, Ashish Lamba for secretary and Abhishek Chaprana for joint secretary.

Around 40 per cent of the 1.3 lakh eligible students voted in the elections to the DUSU on Thursday.

After a delay of almost two hours, the counting of votes for the Delhi University Student Union (DUSU) election began around 8:30 AM on Friday. The election for student body representatives was held across 52 polling stations set up in various colleges and faculty departments.

According to DU Chief Election Officer Ashok Prasad, votes were counted at the Community Hall of the Police Lines in northwest Delhi`s Kingsway Camp.

Last year, the election saw a 44.46 per cent voter turnout. The polling for four positions of (DUSU) ended amid allegations of EVM malfunctioning. Sixteen candidates, including 4 women, were in the fray and 52 polling centres were set up.

The voter turnout recorded across 43 morning colleges was 39.69 per cent, almost four notches down from last year's figure of 43.8 per cent. In 2017, the overall voting percentage was 42.5 per cent while it was 36.9 per cent in 2016. Last year, the ABVP had won three posts while the NSUI won one post.

Hot and humid weather, holidays in colleges and disenchantment of students with the politics were cited as reasons for the lower turnout. Thursday was a declared holiday for students on account of it being election day, so students did not turn up to cast their votes, said some student leaders.

There were long queues to cast votes as Law Faculty, Miranda House and Ramjas College. In the North Campus, almost 400 police personnel were deployed to prevent any untoward incident, police said.