The Police took another girl in custody for holding a placard reading 'Dalit Mukti, Kashmir Mukti & Muslim Mukti' in Kannada. 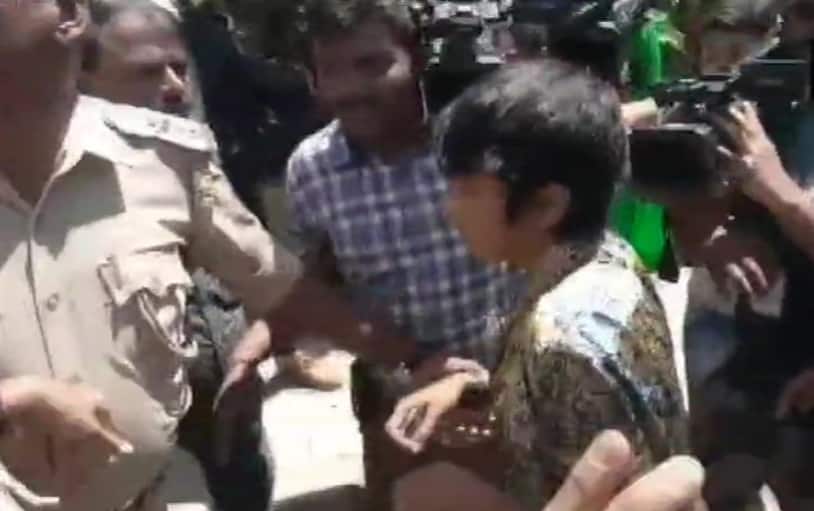 Bengaluru: A day after Amulya Leona incident of raising pro-Pakistan slogans at an anti-CAA rally organised by AIMIM in Karnataka, the state police on Friday (February 21) took another girl in custody for holding a placard reading 'Dalit Mukti, Kashmir Mukti & Muslim Mukti' in Kannada. The girl was sitting among Hindu Jagaran Samiti members who were protesting against  Amulya Leona. The Bengaluru Police later disclosed the name of the woman as Arudra.

Confirming the incident, Bengaluru Police Commissioner Bhaskar Rao said that the girl was taken in custody for interrogation. "The girl is a fashion designer ... she is not minor ...She is regretting her action," he said, adding "She does not know anything about CAA /NRC." "Who is instigating these people we need to find out," he added.

Meanwhile, Bhaskar Rao said, "a case has been registered against the girl (Amulya) and others. She has been remanded to judicial custody. We are looking at role of organisers. Role of honourable MP(Asaduddin Owaisi) does not figure anywhere as he was also an invitee."

Karnataka Home Minister Basavaraj Bommai, however, told ANI, "Amulya Leona comes from a place where Naxals have been very active for a long time. She has shared a lot of posts on Facebook. We will investigate these angle as well."

Earlier in the day, Amulya Leona's residence at  Gubbi Gadde village Chikmagalur was vandalised by some protesters. Keeping the family's safety in mind, security detail has been provided to the family.

The police filed an FIR against Amulya under Section 124A (Offence of sedition) of the Indian Penal Code and she has been sent to 14-day judicial custody.

Amulya Leona, 24, had raised 'Pakistan Zindabad' slogan during an anti-CAA rally organised by AIMIM in Karnataka on Thursday.

Amulya Leona's father and small-time Janata Dal (Secular) leader Oswald Naronha condemned his daughter's act, and added "the guilty should be punished as per law". He claimed that he had tried advise Amulya many a times but she does not heed his advice.