The SP-BSP delegation will hand over a memorandum to the state's Governor on the issue. 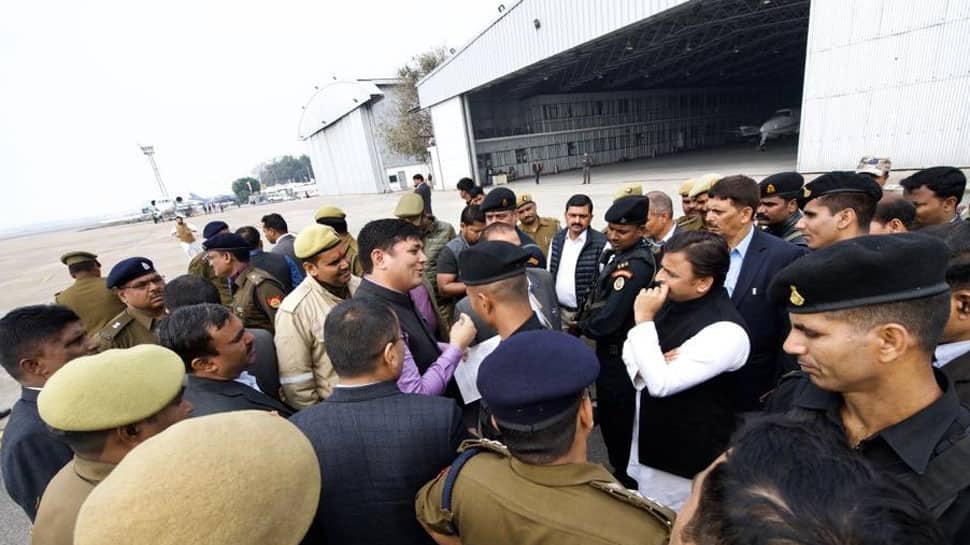 The SP-BSP delegation will hand over a memorandum to the state's Governor on the issue.

A war of words has erupted between the ruling BJP and the SP over the issue.

SP president Akhilesh Yadav had slammed the Yogi Adityanath government for preventing him from boarding a plane to attend a function at Allahabad University.

Akhilesh Yadav expressed his displeasure over the issue during a press conference and later took to Twitter to express his views.

"I have agreed to attend the programme at Allahabad University on December 27. I stated clearly that if there is a problem, the authorities must inform me in advance. As I was about board the flight, the police informed me that I am not allowed to travel to the University. This is undemocratic," the SP chief said

"Today, I was stopped from boarding a flight to attend a student union program at Allahabad University. I haven`t been given a reason why but it seems a general impression was that I would create a law and order problem," Akhilesh said in a tweet.

I was prevented from boarding the airplane without any written orders. Currently detained at Lucknow airport.

It is clear how frightened the govt is by the oath ceremony of a student leader. The BJP knows that youth of our great country will not tolerate this injustice anymore! pic.twitter.com/xtnpNWtQRd

The SP chief also issued a statement over his detention at the Lucknow Airport.

My statement on the negative and undemocratic politics behind my detention at Lucknow Airport. pic.twitter.com/dP7MvdjOcT

Responding to the incident, Bahujan Samaj Party chief Mayawati also tweeted that the move was an example of the BJP government’s dictatorship and anti-democratic.

Extremely condemnable that Samajwadi Party President and former UP Chief Minister Akhilesh Yadav was stopped at Lucknow airport today in order to prevent him from attending programme in Allahabad. This is anti-democratic and an example of total dictatorship of BJP government.

West Bengal chief minister Mamata Banerjee too spoke on the same lines and condemned the move taken by the Uttar Pradesh government. "I have already spoken to @yadavakhilesh. We all condemn the arrogant attitude of the so-called #BJP ‘leaders’ who didn`t allow Akhilesh to address the students. Even @jigneshmevani80 was not allowed. Where is the democracy in our country? And they are giving lessons to everybody!" she tweeted.

"Strongly condemn the high-handed behaviour of Lucknow authorities against Samajwadi Party leader Akhilesh Yadav. Another instance of BJP`s intolerance against its political opponents. Really democracy is in danger," Naidu said.

Samajwadi Party leaders also created uproar in Rajya Sabha on Tuesday over the incident following which the Speaker adjourned the House till 2 PM.