The event was organised to mark the serving of the 3rd billionth meal by the Akshaya Patra Foundation. 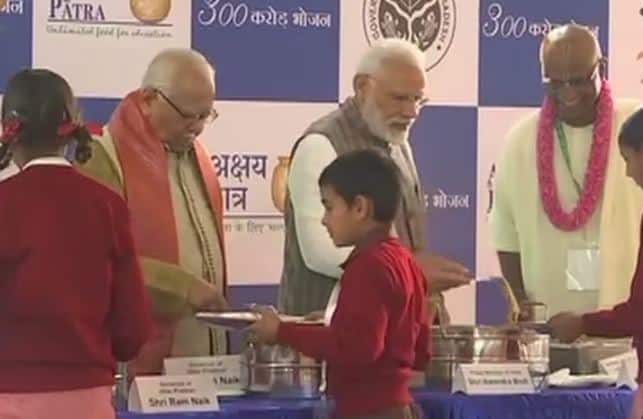 VRINDAVAN: Prime Minister Narendra Modi Monday served meal to a group of underprivileged schoolchildren in Vrindavan and praised the efforts of an NGO towards eradicating hunger from the country.

The event was organised to mark the serving of the 3rd billionth meal by the Akshaya Patra Foundation.

Modi arrived at the venue in a special chopper at 12 noon and was greeted with loud cheers as he walked on to the stage.

"Donation given to deserving people without thinking is 'satvik daan' (pure charity), Akshaya Patra is doing 'satvik daan'," he said.

From serving just 1,500 children in the beginning to over 17 lakh now, the NGO is helping in the growth of the country.

After his nearly 30-minute address, he served food to the schoolchildren from Vrindavan in a special pavilion made for the purpose, behind the main pavilion.

Modi also tweeted a video clip of it and said, "Had the honour of serving food to children in Vrindavan today".

The menu was roti, paneer vegetable, choley, pulao, pakoda, sprouts salad and gajar ka halwa, a spokespeson of the NGO said. He even spoon-fed a few children and blessed them.

Rupesh, a Class 6 student, was thrilled to meet him, and told PTI, "Modiji asked me, if I was eating well and playing regularly or not? Also, if teachers were feeding us properly in schools or not."

Ahead of arriving in Vrindavan to serve meal to underprivileged schoolchildren, Modi Monday had praised the efforts of Akshaya Patra foundation towards eradicating hunger from the country.

"Congratulations to all those associated with this mission. Their efforts towards eradicating hunger are exemplary," he tweeted.

He also unveiled a ceremonial plaque at the event to mark the serving of "3rd billionth meal" by Akshaya Patra Foundation.

Funded by International Society for Krishna Consciousness (ISKCON), Akshsya Patra is a not-for-profit organisation that works with the government on mid-day meal schemes.

The Bengaluru-based NGO has a state-of-the-art kitchen in Vrindavan and Modi served food to children near the facility. Modi said the work done by the foundation is one of the best examples of "the journey showing the 'me-to-we' transition".

The centralised kitchen located the Mandir's campus caters to government schools in Mathura-Vrindavan as part of the mid-day meal scheme. A silver 'patra' (container), as symbolised in our logo, was gifted to the prime minister, the spokesperson said.