JNU students have been protesting against fee hike and the draft hostel manual, approved by the Inter-Hall Administration (IHA), which includes provisions on dress code and curfew timings. The university administration has partially fulfilled their demands. 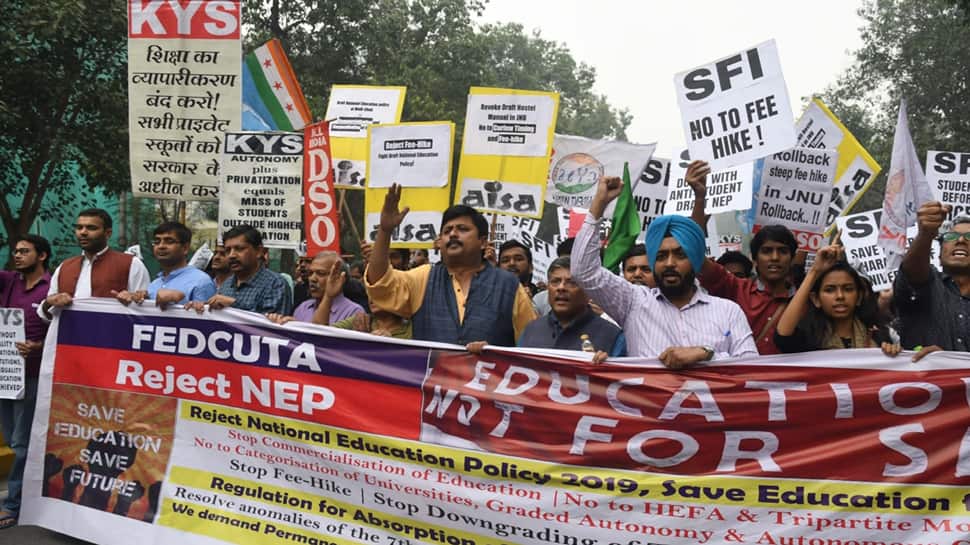 Amid raging protests by the Jawaharlal Nehru University Students' Union (JNUSU), the Student-Faculty Committee (SFC) on Friday held a meeting and proposed a march towards Parliament. The members decided to appeal to students in each centre to boycott classes and assignment to put pressure on the administration through protests.

JNU students have been protesting against fee hike and the draft hostel manual, approved by the Inter-Hall Administration (IHA), which includes provisions on dress code and curfew timings. The university administration has partially fulfilled their demands.

In the meeting, it was also decided to make an appeal on behalf of JNUSU to teachers and student community for immediate suspension of all classes and academic work till a complete rollback. An immediate centre level General Body Meeting (GBM) to access the ongoing movement, status on classes, strikes was also part of the decision. Centre wise mobilisation at Administration Block and activities continuously to engage maximum students was decided upon.

This comes even as JNU Vice-Chancellor, M Jagadesh Kumar, on Friday appealed to the agitating students to stop their protests, as reported by news agency ANI.

"The administration has taken an extremely grim view of this condemnable and reprehensible behaviour of the agitating students and their mentors. Let us all appeal to the agitating students, once again, to stop their protests, which have been hampering studies of thousands of students on the campus who are preparing for their end-semester examinations and trying to write their term papers," read a statement by Kumar.

Kumar said that despite concessions given, students on strike have continued to press their demand for the complete withdrawal of the hostel manual. "Some of them have turned violent causing intimidation and physical insecurity to some JNU teachers and officials in the campus. Even lady guards are not spared. Such persistent protests involving occupation of the Administration Building, defacing of walls and floors and indulging in brawls with security guards and breaking open doors have maligned the image of JNU seriously," read his statement.

He said that the agitating students have "repeatedly broken laws, indulged in violating court orders, surrounded the houses of faculty members, harassed and tormented them and their family members". "On 13th November, these students entered the Administration Building and vandalized badly the offices of the Vice-Chancellor and other officials. This vandalism of government property is going to cost lakhs of rupees in repair," read Kumar`s statement.

The Vice-Chancellor also said that the changes in hostel charges were not only reasonable but vital for the "financial viability" of hostels. He added said that the JNU administration would always like to engage in dialogue and discussion, but the process and form of any such interaction cannot be dictated through "coercion" and "illegal" methods.