Union Home Minister also said that we should harness natural resources and not exploit them. 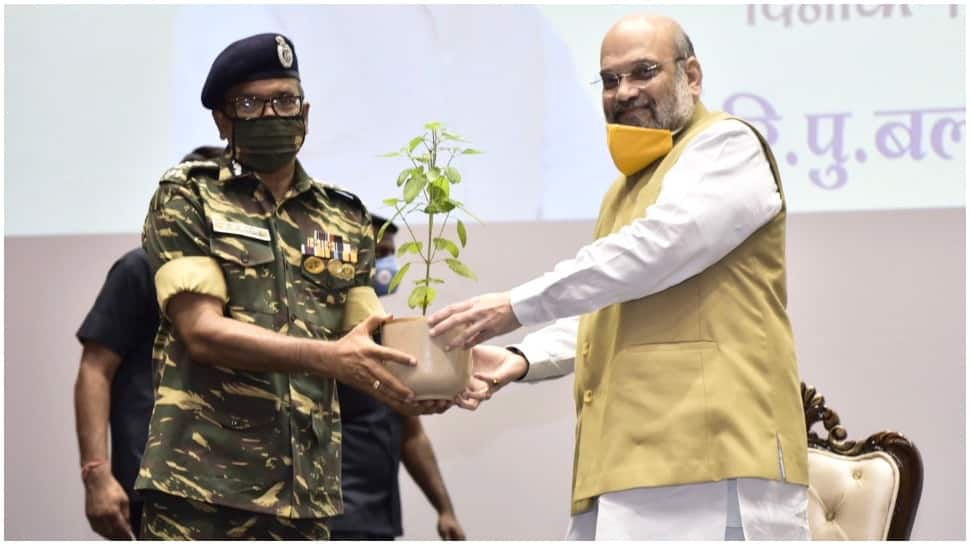 New Delhi: Union Home Minister Amit Shah on Sunday (July 12, 2020) launched the CAPFs nationwide tree plantation drive in Gurugam and said that several programmes are being run on environmental protection but only tree plantation can check pollution and save the Earth.

He stated that the Central Armed Police Forces (CAPFs) personnel across the country are not only providing security at various locations across the country such as airports, and railway stations and fighting the scourge of terrorism, but are also contributing in the nation's battle against the COVID-19 pandemic.

Shah said the CAPFs have lost more than 31 Jawans to the pandemic and paid his respects to them on this occasion.

The Home Minister said this tree plantation campaign is being undertaken at a time when the world is faced with this pandemic.

Amit Shah said that the battle against COVID-19 is being carried out under the leadership of Prime Minister Narendra Modi with people's participation.

"Today India is leading a successful fight in managing the pandemic in the country. At a time when the health services of even the most developed countries were collapsing under its impact, the whole world was concerned how would India, - such a big densely populated country with a federal structure, fight this pandemic, but today the most successful fight against this pandemic has been fought in India under the leadership of the Prime Minister Narendra Modi."

The Union Home Minister said India is on a strong pedestal in the fight against COVID-19 under the leadership of the Prime Minister with the motto - ‘One People, One Thought, One Nation’.

"Nowhere across the country there is a state of panic, in fact, we are committed to facing this challenge and are resolute in overcoming this pandemic," said Shah.

The Union Home Minister saluted the Corona Warriors of the CAPF who not only provide security and fight terrorism but also set an example before the nation and the world by being alert during deployment on COVID-19 duty, without bothering about their own life and safety.

He said that the nationwide CAPF tree plantation drive has set a target of 1.37 crore saplings. He also quoted an ancient Hindu text and said a tree is worth more than ten sons.

Amit Shah said we should harness natural resources and not exploit them. He said our sages had long ago emphasised that one must not exploit Nature but instead must support Nature.

"Due to the exploitation of Nature, the ozone layer is depleting. We are emitting more carbon-di-oxide and carbon mono-oxide into the environment and without the ozone layer life is not possible," said Shah.

Emphasising on the important role played by trees in reducing pollution, Shah said that various varieties of saplings have been chosen in this plantation drive such as peepal, jamun, neem, vatavriksh, burgud based on their oxygen giving capability and abilities to survive in different seasons. He said several programmes are being run on environmental protection but only tree plantation can check pollution and save the Earth.

Amit Shah said PM Modi participated in the Paris World Environment Summit where he cautioned the world against overexploitation of Nature and the world accepted the Modi Formula in the Paris Declaration on tackling Climate Change.

"As a result of the Prime Minister’s efforts, the International Solar Alliance was set up in India," he said.

"It was during Shri Narendra Modi’s tenure as Chief Minister of Gujarat that it became the first state in India where a separate department was set up on environmental protection. The Prime Minister has also stressed on use of green fuels and has encouraged the use of ethanol-blended petrol," Shah added.

The Union Home Minister also stated that various programmes of the Government of India such as 8 crore free cylinders to rural households are also environmental friendly.

He concluded his address by saying that the CAPFs must ensure that the tree plantation drive should not be seen as the conclusion. It must be ensured that the saplings are taken care of till they are able to sustain on their own.

“I commend the brave CAPF Jawans and applaud them for not only protecting and securing the nation but also having undertaken this massive campaign to plant more than one crore saplings of long-lasting trees,” he said.

On the occasion, Shah also planted a sapling of a peepal tree.

To mark the plantation drive, more than 10 lakh saplings are being planted at various locations of the Central Armed Police Forces (CAPFs) throughout the length and breadth of the country.