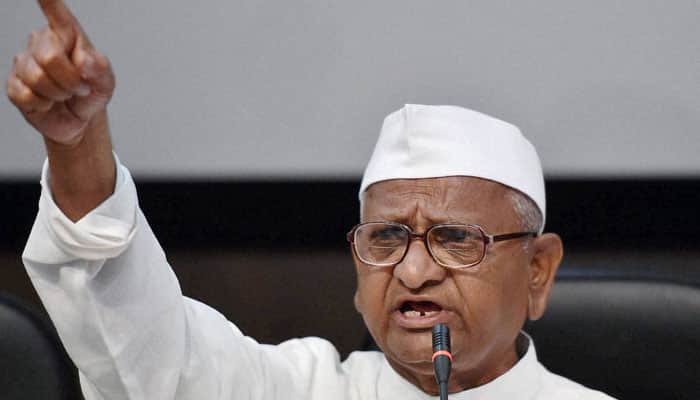 MUMBAI: Noted anti-corruption crusader and social activist Anna Hazare has warned that he will launch a hunger strike from January 30 over the Centre’s failure to appoint the anti-corruption ombudsman as per the Lokpal and Lokayukta Act, 2013.

Hazare said that his fresh agitation for the appointment of a competent Lokpal will be launched at his village Ralegan-Siddhi in Maharashtra.

''Law (Lokpal and Lokayuktas Act) was made in 2013, then Narendra Modi govt came in power in 2014, we felt that something will be done now, but they did nothing in last five years. So I have decided to go on a hunger strike from 30 January, in my village Ralegan Siddhi,'' Hazare told ANI..

Anna Hazare: Law ( Lokpal&Lokayuktas Act) was made in 2013, then Modi govt came in power in 2014, we felt that something will be done now, but they did nothing in last five years. So I have decided to go on a hunger strike from 30 January, in my village Ralegan Siddhi. pic.twitter.com/UAGIIxk4pf

Hazare had earlier written a letter to the PM's Office he which he reminded the Modi government that it didn't fulfill its promise of appointing a competent Lokpal.

In his letter, addressed to the Minister of State (MoS) in Prime Minister's Office (PMO), Jitendra Singh, Hazare alleged that the NDA government kept on making excuses to avoid the appointment of Lokpal at the Centre and Lokayuktas in states.

The Narendra Modi government first said that Lokpal could not be appointed as there was no Leader of Opposition in the Lok Sabha (who is to be part of the selection process) and later it said there was no eminent jurist in the selection committee, Hazare said in the letter.

Claiming that he had earlier postponed or suspended his agitation over promises made by the Prime Minister Narendra Modi-led government and its emissaries, Hazare said that he was wrong to trust their “lies”.

He sat on a fast at Ramlila Maidan in Delhi on March 23 last year but called it off later when the PMO gave a written assurance that his demand would be fulfilled.

Hazare then set a deadline of October 2 for the appointment of Lokpal and Lokayuktas.

"On October 2, my agitation was to start from my village Ralegan Siddhi, but Maharashtra chief minister and other ministers again assured me that the appointment of Lokpal and Lokayuktas was in a final stage. I decided to give one more chance and wait till January 30," he wrote.

"It is obvious that the present government does not have the intention to appoint Lokpal and Lokayuktas," he alleged.