Owaisi alleged that Muslims are being lynched and an atmosphere of hatred is being created against them for their refusal to chant religious slogans. 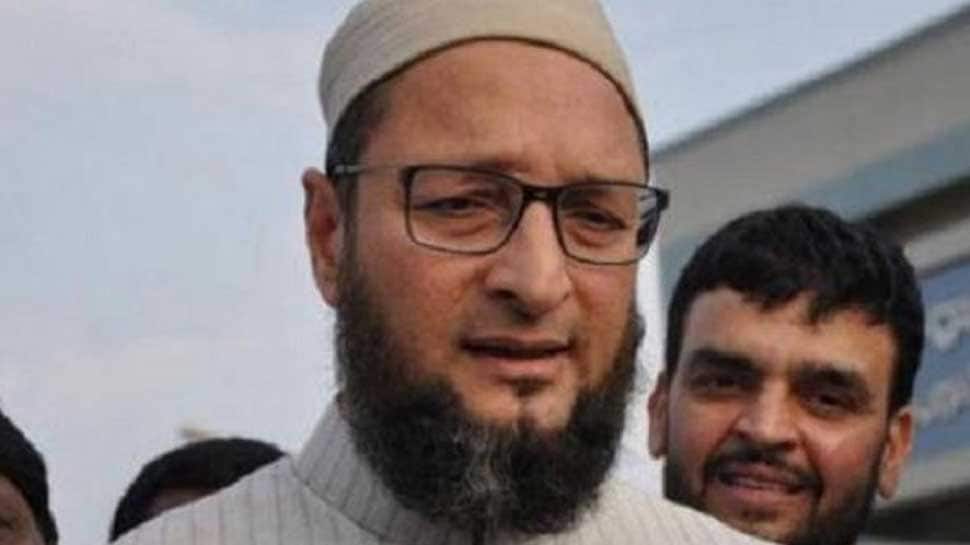 HYDERABAD: All India Majlis-e-Ittehadul Muslimeen (AIMIM) chief Asaduddin Owaisi has alleged that Muslims in India are being terrorised today for not saying 'Jai Sri Ram' and 'Vande Mataram.'

The AIMIM chief made these remarks while speaking to ANI during which he refrained from saying 'Jai Sri Ram' and 'Vande Mataram' and referred to them as JSR and VM.

Owaisi alleged that Muslims are being lynched and an atmosphere of hatred is being created against them for their refusal to chant religious slogans.

The Hyderabad AIMIM MP further said that the Muslims are being targeted at the behest of the RSS – the ideological parent of the ruling BJP.

''People are being beaten up if they do not raise slogans of JSR (Jai Shri Ram) and VM (Vande Mataram). Such incidents aren't going to stop. Only Muslims and Dalits are being targeted. There are organisations behind such incidents and all of them are linked to the Sangh Pariwar,'' the AIMIM chief said.

AIMIM MP Asaduddin Owaisi: People are being beaten up if they do not raise slogans of JSR (Jai Shri Ram) & VM (Vande Mataram). Such incidents aren't going to stop. Only Muslims&Dalits are being targeted. There are orgs behind such incidents&all of them are linked to Sangh pariwar pic.twitter.com/GCV26YMENW

Owaisi also attacked Union Minister Mukhtar Abbas Naqvi, who had earlier pleaded people not to see the incidents of attack on Muslims from a religious angle.

''If a Muslim is born, it is said that they are increasing their population, if he goes to a 'madarasa', he is linked to terrorism, if he dies, they say a piece of land is needed to bury him..what is this happening in the country...a message is being given to India, which is not correct and against the Constitution of the country,'' he said.

Referring to the chargesheet filed by the Rajasthan government against 2017 Alwar mob lynching victim Pehlu Khan and his family members for cow smuggling, Owaisi said that this has exposed the double face of the Ashok Gehlot-led Congress government in the state.

The AIMIM chief had on Saturday urged the Muslims to stop supporting Congress, alleging that the party has betrayed them.

"When Pehlu Khan was attacked, Congress condemned it. It is a condemnable act by the Ashok Gehlot government. I urge the Muslims of Rajasthan to stop supporting the Congress, which has always betrayed them," Owaisi said.

All this came after Rajasthan Police filed a chargesheet for cow smuggling against Khan, who was allegedly lynched in 2017 by a mob of cow vigilantes in Alwar for allegedly transporting cattle, and his two sons.

Equating Congress with BJP, AIMIM chief said, "Whenever they (Congress) come to power, they become a replica of the BJP. When they are in opposition, they shed crocodile tears."

The police chargesheeted Khan and his sons - Irsad (25) and Arif (22) - under various sections of Rajasthan Bovine Animal (Prohibition of Slaughter and Regulation of Temporary Migration or Export) Act, 1995.

The chargesheet against Khan was prepared on December 30 last year, 13 days after Chief Minister Ashok Gehlot`s government came to power in Rajasthan.

55-year-old Khan, a native of Nuh in Haryana and a dairy farmer, was allegedly beaten up by self-styled cow vigilantes near Behror in Rajasthan on Delhi-Alwar highway on April 1, accusing him of smuggling cattle. He succumbed to his injuries at a private hospital on April 3.

NIA arrests engineer in Ranchi for connection with PLFI