Assam Chief Minister Sarbananda Sonowal on Monday informed that over 70 lakh people have been affected due to the floods. 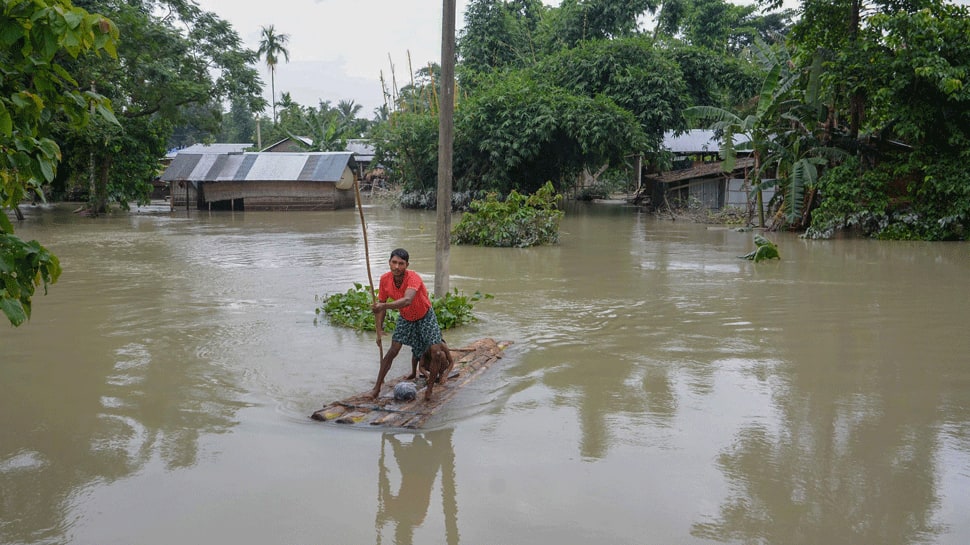 Guwahati: Six more people died in flood-related incidents in Assam where the deluge has affected nearly 25.29 lakh people in 28 of the 33 districts of the state. Assam Chief Minister Sarbananda Sonowal on Monday informed that over 70 lakh people have been affected due to the floods.

This is the third wave of floods in Assam and has caused the highest damage in comparison to two previous waves.

Goalpara is the worst-hit district with over 4.53 lakh people affected, followed by 3.44 lakh in Barpeta and 3.41 lakh in Morigaon.
Personnel of the State Disaster Response Force, district administrations and local people have rescued 366 persons during the last 24 hours, the ASDMA said.

People displaced, rescued in the floods:

As per the ASDMA, at least 25 lakh people have been affected in the state. The death toll due to floods and landslides this year in the state has increased to 110, with 84 dying in flood-related incidents

The ASDMA said the authorities are running 564 relief camps and distribution centres across 18 districts, where 145648 people have taken shelter. At present, 2,400 villages are under water and 1,12,138.99 hectares of crop areas have been damaged across Assam.

The Brahmaputra is flowing above the danger mark at Dhubri and Goalpara cities, besides at Nimatighat in Jorhat and Tezpur in Sonitpur districts. Its tributaries -- Dhansiri, Jia Bharali, Kopili, Beki, Kushiyara and Sankosh -- are also flowing above danger levels at various places.

Embankments, roads, bridges, culverts and many other infrastructure have been damaged in Dibrugarh, Chirang, Barpeta, Goalpara and Nagaon districts.

Massive erosions have been witnessed at different places of Biswanath, Dibrugarh, Majuli and Chirang districts, the ASDMA said.

The IMD has predicted more rains in the state.

The deluge has so far taken away the lives of 108 animals of different species, while 134 others were rescued in Kaziranga National Park, the bulletin said quoting the DFO of the Eastern Assam Wildlife Division. 9 one-horned rhinos, 4 wild buffaloes, 7 wild boars, 2 swamp deers and 82 hog deers have died in the flood.

80 per cent of Kaziranga National Park is inundated. Animals are not shifted unless injured. They naturally migrate to higher regions.

The animals come out of the flooded Kaziranga on the NH 37 which is also an animal corridor and cross over to the district of Karbi Anglong district. It has jungles and they reside there until the water levels recede. They naturally migrate.

The flood has also affected 25,85,294 domestic animals and poultry across the state during the last 24 hours.