In a surgery that is no less than a miracle, a team from Narayan Health City under Dr Devi Shetty operated on Kliyan to separate her heart from that of her sister, saving one of the twins in the process.

Bengaluru: Surgeries to separate conjoined twins may be complicated but have increasingly become common with advancements made in the medical field. The case of a pair of conjoined twins from Mauritius, however, was far more complicated than is seen usually. For doctors at Bengaluru's Narayan Health City Hospital, it was a challenge which was eventually met with success.

What made the case of these conjoined twins extremely sensitive was that their hearts had become intertwined with each other. Five-month-old Kliyan and her twin sister were taken by their father - with the assistance of the Mauritian government - to Narayan Health City Hospital. When they were brought here by their father - Ian, they were just six days old. The team of specialist doctors found that their condition was not stable enough to perform any operation at the time. It was decided that they would have to wait for six months to perform any surgery. 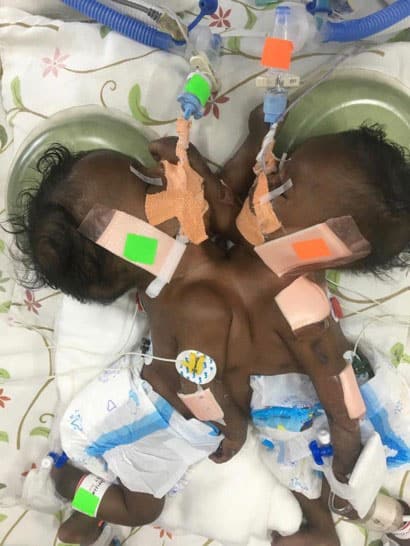 Since her sister's body had not formed completely, it began to weigh down Kliyan with passing time - further complicating the case. Also, where a human heart has four valves for blood circulation, the twins together had seven. Kliyan's condition had begun to deteriorate. After consulting Ian and at two months of age, a sensitive surgery was performed by a team led by renowned heart surgeon Dr Devi Shetty to separate Kliyan's heart from that of her sister, saving her life in the process. The procedure took 10 hours and tissues were taken from her sister to repair the portion cut on Kliyan's body.

Since, Kliyan has been kept under observation and her vital parameters have been normal in what has been a massive relief for Ian and his entire family. The procedure may have been extremely complicated and required extreme skill and knowledge but the end result is what the father and his family had been praying for.

While the team of doctors too celebrated, the entire medical process was also made possible because Narayan Health City Hospital chose to go forward with it regardless of whether the cost of ICU, tests, surgery and post-surgery ops could be paid. The hospital is known for its charitable outlook in helping people from all over the world.