Bhoomi pujan of Ram Temple in Ayodhya: List of persons who will attend historic ceremony on August 5

Although people from every walk of life wish to participate in the historic ceremony, especially those who have been associated with the Ram Mandir movement, only 200 people will be allowed to remain present on this auspicious occasion in view of the COVID-19 guidelines. 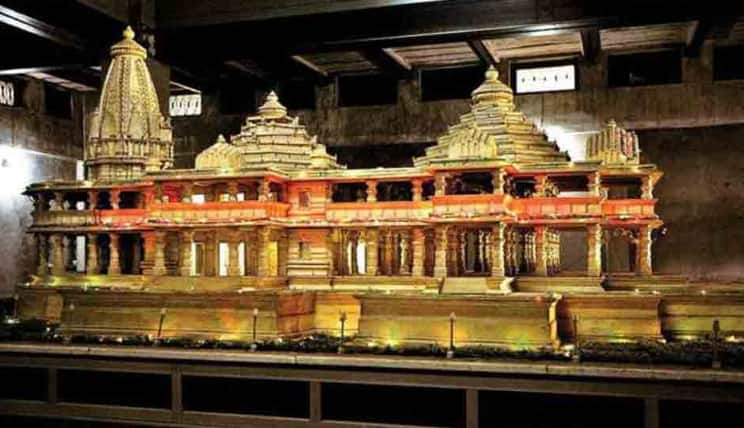 New Delhi: Prime Minister Narendra Modi will be attending the 'bhoomi pujan' ceremony of Ram Temple's in Ayodhya on August 5. No chief minister from any state has been invited for this ceremony. Only Yogi Adityanath, Chief Minister of Uttar Pradesh, will participate in the ceremony as per the protocol.

Although people from every walk of life wish to participate in the historic ceremony, especially those who have been associated with the Ram Mandir movement, only 200 people will be allowed to remain present on this auspicious occasion in view of the COVID-19 guidelines.

Apart from coronavirus, security is the other factor to deprive devotees and others from catching the glimpse of the historic occasion on August 5.

Vishwa Hindu Parishad (VHP), Shri Ram Janmabhoomi Tirtha Kshetra Trust, key members of Ram Mandir High Powered Committee and top administrative machinery would play important role in finalising this list, sources told Zee News, adding that all visitors will be notified by telephone or through a letter in a day or two.

Those who are involved in determining the guest list are understood to have been facing the pressure mostly from religious leaders.

There are several prominent people who took part in the Ram temple movement, politically and religiously, have passed away, but efforts are on to invite those who are alive.

The trust members include:

The Vishwa Hindu Parishad has played a key role in the Ram Mandir movement for years, but personalities like Ashok Singhal, Vishnu Hari Dalmia, and Acharya Giriraj Kishore have left for their heavenly abode.

As the construction of Ram temple has been the dream of the RSS, it is believed that top leaders of the Sangh will also grace the occasion. The RSS chief, Mohan Bhagwat, along with 2-3 officials will attend the historic occasion.

Apart from these persons, the members of VHP's High Powered Committee comprising 40 to 50 can also be called. The persons among those include Ram Vilas Vedanti, Jitendra Nand Saraswati.

UP Chief Minister Yogi Adityanath will participate in the ceremony and with him can be his two deputies Keshav Prasad Maurya and Dinesh Sharma.

Notably, prominent lawyers who argued in the courts regarding the Ram temple case can also be called.

VHP's Working President Alok Kumar clarified that Maharashtra Chief Minister Uddhav Thackeray has not been invited for the 'bhoomi pujan' of Ram Temple in Ayodhya.

Congress party's interim president Sonia Gandhi and Rahul Gandhi have also been invited for the bhoomi pujan of Ram Temple in Ayodhya.