A full-blown face-off between West Bengal government and the Centre erupted as a CBI team moved to arrest Rajiv Kumar on Sunday. 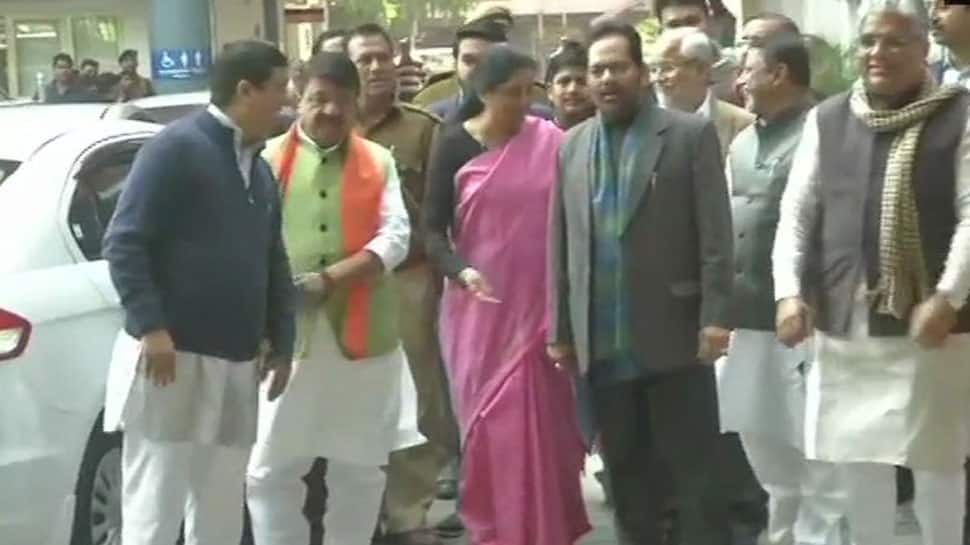 NEW DELHI: Amid an ongoing tussle between the West Bengal government led by Chief Minister Mamata Banerjee and the Centre, a high-level delegation of the ruling BJP met the Election Commission officials on Monday and apprised them of the fast deteriorating law and order situation in the TMC-ruled state.

The BJP leaders alleged that the Mamata Banerjee government was deliberately “blocking rallies” of its party leaders in the state.

Talking to the reporters later, Union Minister Mukhtar Abbas Naqvi said, ''A high-level delegation of the BJP met the EC officials on Monday. During the meeting, we have demanded the poll panel to thoroughly assess the alarming situation in West Bengal. We have also requested the poll panel to remove those state government officers who are acting as the agents of the state government and the deployment of the central armed forces for the smooth, free and fair conduct of the election in the state.''

''During our meeting with the poll panel officials, we apprised them of the extremely dangerous situation in West Bengal where the central government officers are being threatened, allegedly detained and the raised the issue of repeated denial of permission by the TMC government to BJP leaders and their rallies across the state,' Naqvi said.'

Speaking to reporters on her turn, Union Defence Minister Nirmala Sitharaman said, ''In the interest of free and fair environment in which the upcoming Lok Sabha polls can be conducted, we have come to bring to the notice of EC certain happenings in WB which has complete cooperation of TMC. Instances which we highlighted point out that the ruling TMC  doesn't believe in democracy. The party which is ruling in the state and its supporters are out in the open to ensure that no other political party gets permission to carry out its legitimate activities ahead of the polls.''

Nirmala Sitharaman: In interest of wanting free & fair environment in which LS polls can be conducted,we have come to bring to the notice of EC certain happenings in WB which has complete cooperation of TMC.Instances we highlighted point out that TMC doesn't believe in democracy pic.twitter.com/9sVZ0yDBkb

The meeting of BJP leaders with the EC officials came a day after UP CM Yogi Adityanath’s chopper was denied permission to land in Dinajpur, where he was slated to address two rallies.

The UP Chief Minister later addressed the rallies via mobile.

A full-blown face-off between West Bengal government and the Centre erupted as a CBI team moved to arrest Rajiv Kumar, which in turn, were unceremoniously denied entry to Kolkata Police chief's residence and then detained.

Escalating her confrontation with the Centre, Mamata Banerjee started a sit-in on Sunday night to protest against what her Trinamool Congress party alleged a "coup" by the Narendra Modi government.

Extending support to Mamata, her party workers also staged a 'rail roko' protest in Rishra and Asansol over the ongoing issue.

The CBI on Monday moved the Supreme Court accusing the West Bengal government of impeding the investigation of a court-ordered probe into the chit fund scams.

The top court, which declined an urgent hearing on the CBI plea, posted the matter for hearing on Tuesday.

The CBI wanted the top officer to hand over the seizure list made during his probe, sources said.

Reportedly, the top cop was to be questioned regarding missing documents and files but he is not responding to notices to appear before the agency.

Rajeev Kumar, according to media reports, became apprehensive of his arrest after Bengali film producer Shrikant Mohita was taken into custody.