In the poster, voters are apparently shown as Draupadi who is being 'disrobed' by the Election Commission of India (ECI), depicted as the Kauravas. 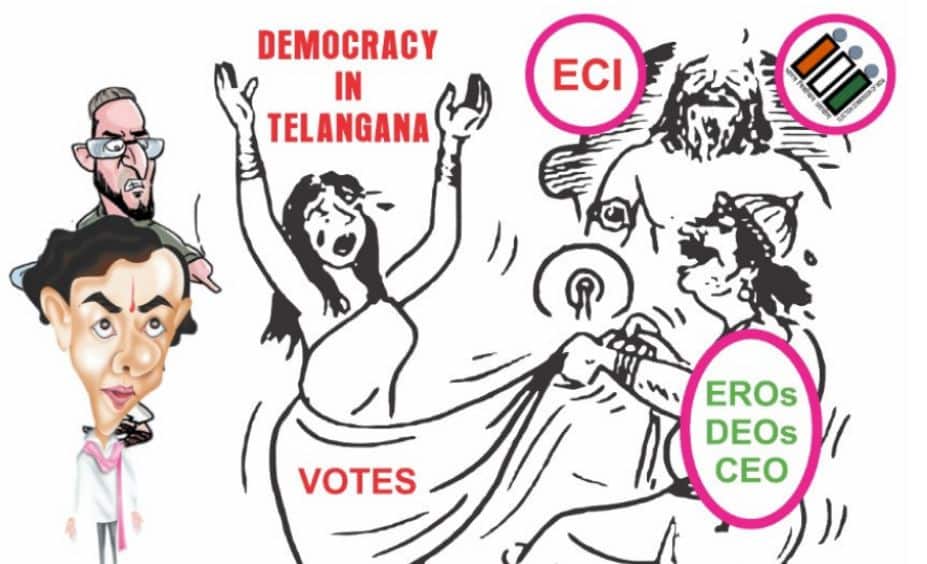 HYDERABAD: The BJP has sought an unconditional apology from Congress President Rahul Gandhi after Congress party in Telangana put up a cartoon using 'Vastraharan' of Draupadi from Mahabharata to highlight the alleged failures of election authorities in holding a free and fair election in the state.

ANI reported that the Congress'poster titled 'Democracy in Telangana’ was used by the party workers on Thursday. In the poster, voters are apparently shown as Draupadi who is being 'disrobed' by the Election Commission of India (ECI), depicted as the Kauravas. Telangana Chief Minister K Chandrasekhar Rao and Asaduddin Owaisi, the All India Majlis-e-Ittehad-ul Muslimeen (AIMIM) chief, are also seen standing in the poster.

Telangana BJP spokesperson Krishna Sagar Rao said that whether the newly-appointed Congress general secretary, Priyanka Gandhi Vadra would "approve" of women and Hindu mythological characters shown in such a way by her party workers.

Owaisi also took offence to the poster and said that the Congress has used the poster in “completely wrong” manner and it is deeply offensive to women.

"What if someone creates a cartoon of Sonia, Priyanka and Rahul Gandhi? How would the party react? I respect Sonia Gandhi a lot. The Congress party can protest for their rights but not in such a way that insults women," Owaisi told ANI.

However, Telangana Congress election committee chief, Marri Shashidhar Reddy defended the poster, stressing that the poster was not at all offensive.hhe added that the BJP is “out of their mind” for seeking an apology from Rahul Gandhi and asking questions from Priyanka Gandhi.

The senior Congress leader remarked that he himself is a Hindu and he will never do anything to hurt the sentiments of Hindus.

“It is a depiction showing what democracy in Telangana is being subjected to...The Election Commission is silent and they have failed to identify the mistakes in the electoral rolls. I being a Hindu will never do anything to hurt Hindu sentiments," he told ANI.