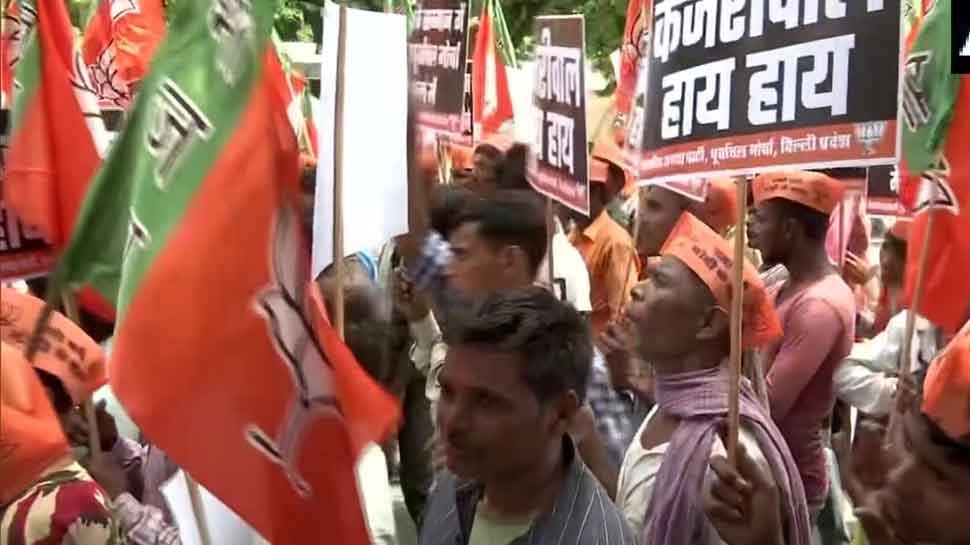 The protest is being led by BJP's Purvanchal Morcha against CM Kejriwal's comment, who had on Wednesday said that if National Register of Citizens (NRC) is implemented in Delhi, then Manoj Tiwari would be the first one to leave the national capital.

Delhi: Police detained members of BJP's Purvanchal Morcha who were protesting against CM Arvind Kejriwal for his remark,"if NRC is implemented in Delhi then Manoj Tiwari (BJP MP) will be the first one who will have to leave Delhi". pic.twitter.com/yb7hBgxo0U

Angry at CM's jibe at their party leader, BJP members on Thursday were seen climbing up barricades, waving BJP flags and shouting slogans against Kejriwal. news agency ANI reported. Meanwhile,the police attempted to disburse the situation with water canons. Several members belonging to Purvanchal Morcha were detained by the police.

After Delhi CM Kejriwal took a jibe at the Delhi BJP chief, Manoj Tiwari responded to him by saying, "the remark has exposed Kejriwal's real face", and alleged that the "AAP chief wants to evict migrants such as Purvanchalis".

'Purvanchalis' is a term commonly used to refer to people from the eastern parts of the country such as Bihar and east Uttar Pradesh. They form a large population of Delhi.

Last month, Tiwari had said the situation in Delhi had become "dangerous" due to the presence of a "large number" of illegal immigrants including Bangladeshis and Rohingyas who have been found involved in "criminal activities".