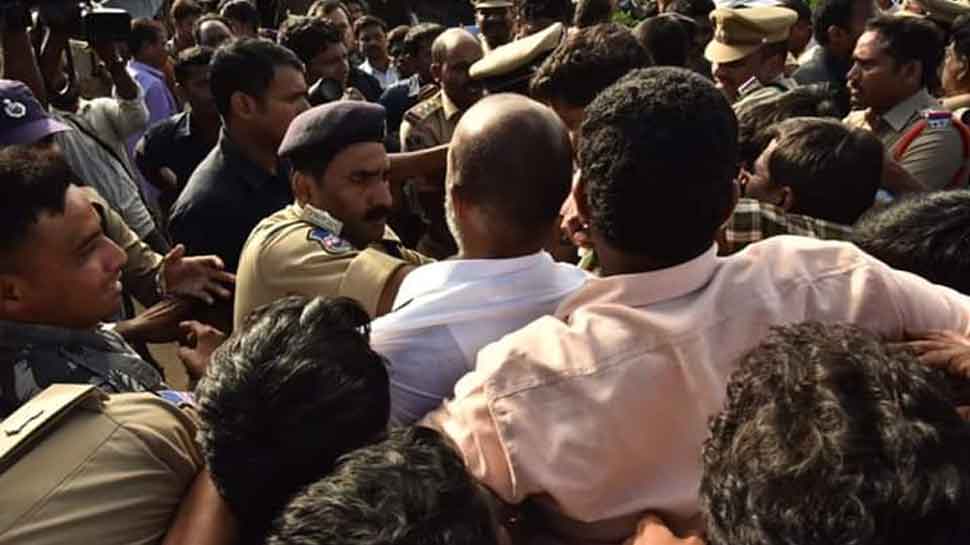 The BJP released a statement saying, "BJP strongly condemns the high-handedness of the senior police officials in dealing with Karimnagar MP Bandi Sanjay who was participating in a peaceful march mourning the death of an RTC employee."

According to the BJP, Bandi Sanjay was participating in a march organised by the opposition parties to protest the death of an RTC employee due to a cardiac arrest when the senior police officials acted "tough" while dealing with protestors. The BJP said, "It's unbecoming of police officers to act tough against opposition party leaders and people representatives, who are duty-bound to protest against anti-people decisions of the incumbent government."

Bandi Sanjay had actively participated in a protest helmed by opposition parties in Telangana which called for a shutdown while continuing protests with the dead body of a striking employee, N Babu, of TSRTC. Police had deployed forces near the residence of N Babu. His relatives, BJP MP Bandi Sanjay Kumar, and leaders of TSRTC employees had continued their dharna with the body for the second consecutive day -- refusing to perform the last rites till the government held talks with the striking employees and resolve the crisis. Babu died of cardiac arrest at the public meeting organized by Joint Action Committee (JAC) of striking employees in Hyderabad on October 30.

More than 48,000 TSRTC employees are on strike since October 5 to press for their demands including the demand for merger of TSRTC with the government. Three employees have committed suicide while more than six have died of cardiac arrest. JAC and opposition parties alleged that the government has pushed the striking employees into depression by sacking them and by not paying them a salary for September.

The BJP has demanded departmental action by the DGP on the concerned police officer for showing "high-handedness" of dealing with its Karimnagar MP.