Blaze in Delhi factory leaves 43 dead; accused to be produced in district court on Monday

A case was registered against the owner of the factory, identified as Rehan, under Section 304 of the Indian Penal Code (IPC) (punishment for culpable homicide not amounting to murder). Rehan, who was running the bag manufacturing unit from a 200-yard plot in the crowded market, was later detained by the police. The manager of the factory, named Fukran was also nabbed. 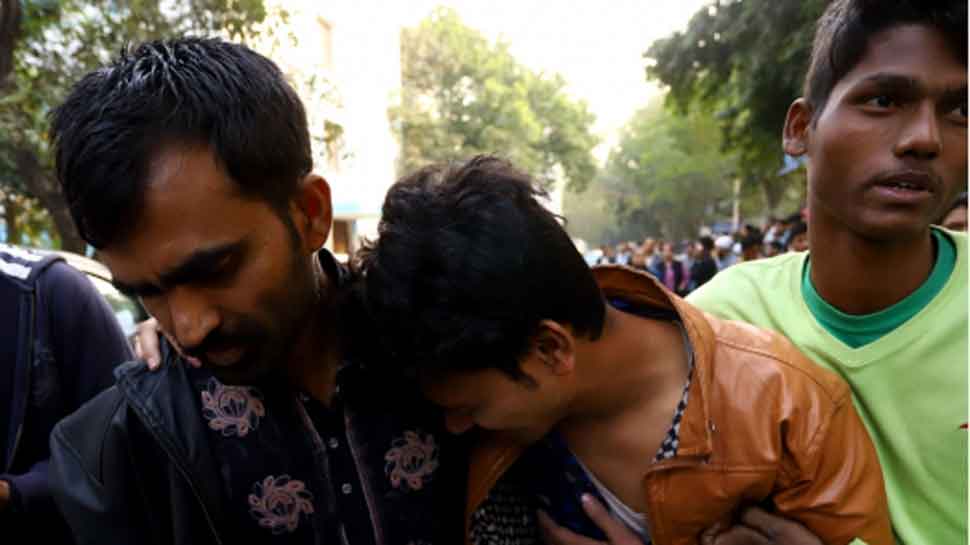 New Delhi: A massive fire broke out in Delhi's Anaj Mandi on Sunday (December 8) in which as many as 43 people died and several others were injured. The incident took place at around 5:00 am when the fire broke out in an illegal plastic factory running inside a house.

The fire further engulfed the second and third floor of the building and two other houses situated in west Delhi’s Rani Jhansi area at the time when most of the people were asleep at the place.

A case was registered against the owner of the factory, identified as Rehan, under Section 304 of the Indian Penal Code (IPC) (punishment for culpable homicide not amounting to murder). Rehan, who was running the bag manufacturing unit from a 200-yard plot in the crowded market, was later detained by the police. The manager of the factory, named Fukran was also nabbed.

The accused will be produced in Delhi's Tis Hazari court on Monday (December 9). The Crime Branch has been handed over the investigation into the matter.

After the incident was reported, the rescue operation teams immediately reached the spot and rescued the people from the building. The affected people were admitted to Lok Nayak Jai Prakash Hospital, Bara Hindu Rao Hospital, RML Hospital and Safdarjung Hospital in Delhi.

Two policemen and two fire department officials also got injured when the rescue operation was underway, which was confirmed by the Delhi Police PRO.

More than 50 people were rescued during the process. Delhi's Deputy Fire Chief Officer Sunil Choudhary informed that the fire broke out in a 600 sq feet plot at around 5 am where around 60-70 people were sleeping. He said, "It was very dark inside. It is a factory where school bags, bottles and other materials were kept."

Delhi Chief Minister Arvind Kejriwal expressed grief over the incident and visited the spot where the accident occurred. Kejriwal ordered a magisterial inquiry into the tragic incident and said that he has asked the probe team to submit the report within seven days. He has also announced a compensation of Rs 10 lakh to families who lost a member in the fire and additional assistance of Rs 1 lakh to those who were injured.

Prime Minister Narendra Modi also condoled the fire incident and said, "The fire in Delhi’s Anaj Mandi on Rani Jhansi Road is extremely horrific. My thoughts are with those who lost their loved ones. Wishing the injured a quick recovery. Authorities are providing all possible assistance at the site of the tragedy."

Taking cognizance of the incident, Union Home Minister Amit Shah directed the concerned authorities to arrange for all possible assistance on an urgent basis. Taking to Twitter he wrote, "Tragic loss of precious lives in the fire accident in New Delhi. My deepest condolences with families of those who have lost their loved ones. I pray for the early recovery of the injured. Have instructed concerned authorities to provide all possible assistance on an urgent basis."

Union Health Minister Harsh Vardhan met all the injured people in the incident admitted to various hospitals and assured them of all the possible assistance from the Centre. He also met the families of the victims and expressed his condolences at the "tragic loss."

Delhi police is suspecting that the fire was caused due to a short circuit, however, the exact reason remains unknown as of now.