The Central Forces on Saturday rescued all 900 people including passengers and staff members, who were stranded on board Mahalaxmi Express near Maharashtra's Mumbai successfully. 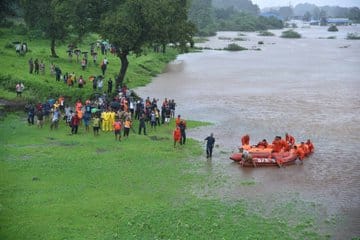 Mumbai: The Central Forces on Saturday rescued all 900 people including passengers and staff members, who were stranded on board Mahalaxmi Express near Maharashtra's Mumbai successfully.

On Friday morning, Mahalaxmi Express, plying between Mumbai and Kolhapur, was held up between Badlapur and Wangani railway stations due to waterlogging on tracks, following the torrential rain in Mumbai and adjoining areas over the last 24 hours.

The Central Railway had requested the Ministry of Defence and Ministry of Home Affairs (MHA) for the evacuation of 900 people stranded on the train.

Two teams of National Disaster Response Force (NDRF) from Mumbai and Pune, along with nine boats were deployed by the MHA to facilitate rescue operations. Along with NDRF teams, nine flood rescue teams from the Indian Navy including five diving teams were deployed with rescue material, inflatable boats, and life jackets.

The Air Force deployed two Mi-17 helicopters and the speaking helicopter, which provided aerial surveillance and support to the ground rescue teams in their efforts. Two columns of the Army along with 130 trained staff, food packages, water, and other rescue material were also put to task.

The Railway Ministry also arranged for all necessary resources including a special 19-coach train the for movement of passengers up to Kolhapur. They also provided medical assistance and refreshment to passengers.

The exemplary efforts put in by all central forces combined ensured that all the stranded people were rescued without any casualty.

The situation was closely monitored by the Home Minister Amit Shah and Minister of State for Home Nityanand Rai.

Shah lauded the efforts of all the rescue teams involved for the successful operation. Nityanand also appreciated the efforts displayed by the teams to rescue all passengers in the shortest possible time.