The Panitola Railway station in Tinsukia district was also vandalized and torched. The Dibrugarh and Tinsukia railway stations have been put on high alert. Passengers have also been stranded at the Dibrugarh Airport. 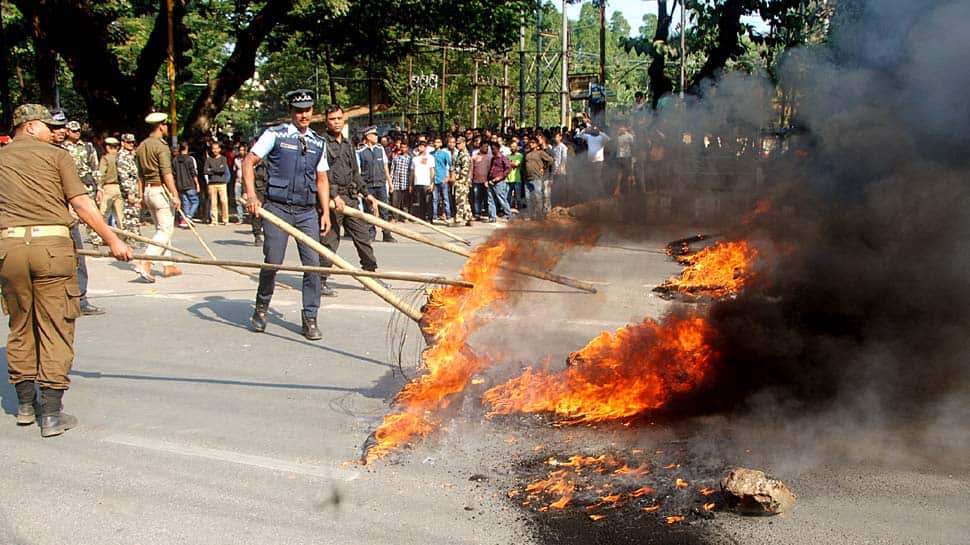 In Guwahati, the curfew that was earlier imposed from 6.15 pm on Wednesday till 7 am on Thursday has now been extended till an indefinite period. Guwahati police commissioner Deepak Kumar said, "Curfew has been imposed in Guwahati (Assam) since 6:15 pm today. It will remain imposed until normalcy is restored here."

The United Liberation Front of Assam (ULFA) has called for a shutdown in Assam on Thursday. A bus was torched by protesters, near Janta Bhawan in Dispur. Two columns of Army which were on standby at Bongaigaon and Dibrugarh have been rushed to Guwahati after the situation escalated. Both the columns have been deployed in Guwahati.

The Bill seeks to give citizenship to refugees from the Hindu, Christian, Sikh, Buddhist and Zoroastrian communities fleeing religious persecution from Pakistan, Afghanistan, and Bangladesh.

A Guwahati-bound flight, 6E 573, from Kolkata has been cancelled. The aircraft was scheduled to depart from Kolkata at 9.20 pm but it was cancelled due to the curfew in Guwahati. A total of 180 passengers of this flight will be adjusted in another flight on Thursday.

Due to the ongoing situation in Assam, everyone has been advised to not to travel in Assam by road till normalcy gets restored. The government has established a helpline 24x7 to assist the people of Arunachal Pradesh stranded in Assam.

The Indian Railways has cancelled 12 trains and partially cancelled 10 trains on December 12-13 due to the indefinite 'Rail Roko' by various organisations and associations, in Tinsukia division and Lumding division in Assam. The Dibrugarh District Magistrate has ordered the closure of liquor licensed premises from 4 pm on Wednesday for 'preservation of public peace and tranquillity'.

The state government has already suspended internet services for the next 24 hours, starting from 7 pm on Wednesday. The ban is being imposed over 10 districts of Assam, including Lakhimpur, Dhemaji, Tinsukia, Dibrugarh, Charaideo, Sivasagar, Jorhat, Golaghat, Kamrup (Metro) and Kamrup. Meanwhile, curfew has been imposed in Guwahati after massive protests triggered at several places in the city.

Earlier, Assam Chief Minister Sarbananda Sonowal was stranded for two hours in the Guwahati airport where agitators gathered in large numbers to protest against the CAB. He was later safely escorted out under high security. The move on the ban of the internet in Assam follows after the Tripura government's decision to ban the internet and SMS services for 48-hour, on Tuesday (December 11),  to prevent mischief mongers from spreading rumours.

Thousands of protesters against the Bill descended on the streets of Assam since Monday (December 9), clashing with police and plunging the state into chaos. Although no party or student body has called a shutdown, protesters, a majority of the students, fought pitched battles with security forces in the restive state, including in front of the Secretariat.

The government has deployed tight security at several places to avoid any public danger. Three Army columns have been requisitioned by the civil administration. Earlier in the day, Assam Police resorted to lathi-charge on protesters in Dibrugarh, while they were demonstrating against the bill. The action was taken by the Assam police after the protestors blocked an ambulance even after the police issued a warning.

The Citizenship (Amendment) Bill aims to amend the six-decade-old Citizenship Act and provide Indian citizenship to non-Muslim refugees from Bangladesh, Afghanistan and Pakistan. The cut-off date for getting citizenship under the bill is December 31, 2014. It was passed in Lok Sabha on Monday (December 9) with a majority of 311 votes against 80 votes where 391 members were present and voting. At noon on Wednesday, it was tabled in the Rajya Sabha by Home Minister Amit Shah.