The Congress leader and the Kamal Nath-led government are having an internal tiff. He is writing a letter to remind the state government of its manifesto and also about the problems of the people.

In a new stir in Madhya Pradesh politics, Congress leader Jyotiraditya Scindia on Monday changed his designation from his profile on micro-blogging platform Twitter. Scindia removed all party posts from his Twitter account and instead wrote 'Public servant, cricket enthusiast'.

The Congress leader and the Kamal Nath-led government are having an internal tiff. He is writing a letter to remind the state government of its manifesto and also about the problems of the people.

Reacting to this, Scindia called it rumours and baseless. "A month back I had changed my bio on Twitter. On people's advice I had made my bio shorter. Rumours regarding this are baseless," tweeted Scindia.

In October, Scindia had resigned from the post of General Secretary of the All India Congress Committee (AICC), which, however, has not been accepted yet. He has been spending more time in his home state of Madhya Pradesh. His close aides such as Govind Singh Rajput and Umang Singhar have been propagating his name for the MPCC chief`s post. 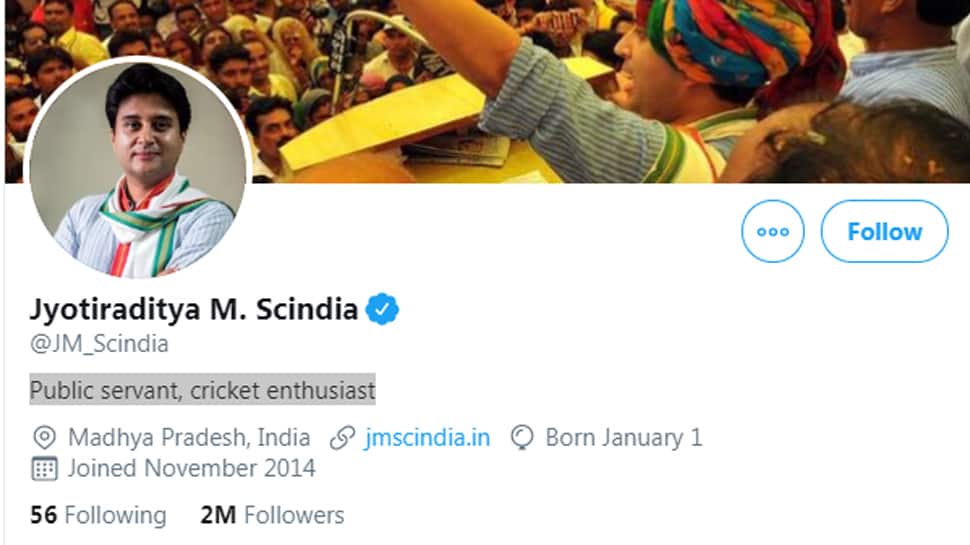 The Congress has been trying to placate Scindia by including him in important party committees, such as screening committee chairman for Maharashtra.

A close aide of Scindia insisted that he should be made the President of the state Congress as a compensation for not being made the Chief Minister. Scindia had refused to become Kamal Nath`s deputy.

The history of infighting in the Congress` Madhya Pradesh unit is generations old. The rift between Digvijay Singh and the Scindias started when the late Madhavrao Scindia, who was close to the party`s top leadership in Delhi, tried to dislodge Digvijay Singh, but could not succeed, said a party insider.

The Madhya Pradesh government is surviving on a razor thin majority, so the party high command is desisting from taking any major step in order to avoid the risk of antagonising any of its factions.