Union Defence Minister Rajnath Singh reviewed the situation and took note of preparations made by the Indian Coast Guard as well as the Indian Navy to combat the cyclone. 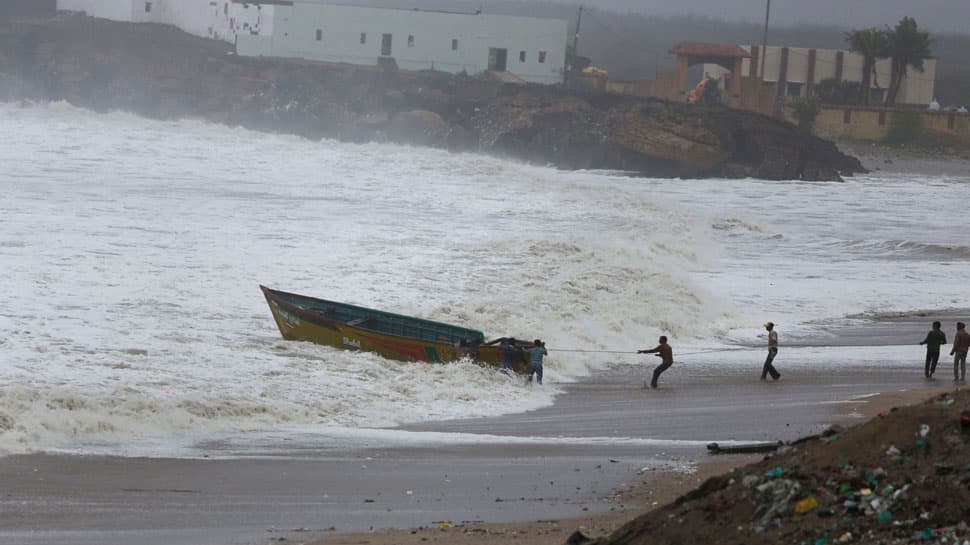 Cyclone Vayu, which was expected to make a landfall in Gujarat on Thursday, has changed its course and will not directly hit the state but is likely to affect the coastal areas, the Indian Meteorological Department (IMD) said on Thursday. It is very likely to move along Saurashtra coast affecting Amreli, Gir Somnath, Diu, Junagarh, Porbandar, Rajkot, Jamnagar, Devbhoomi Dwarka and Kutch districts of Gujarat on Thursday.

Manorama Mohanty, a scientist at IMD in Ahmedabad said: "CycloneVayu won't hit Gujarat. It will pass nearby from Veraval, Porbandar, Dwarka. Its effect will be seen in the coastal regions as there will be heavy wind speed and heavy rain as well."

Union Defence Minister Rajnath Singh reviewed the situation and took note of preparations made by the Indian Coast Guard as well as the Indian Navy to combat the cyclone.

Keeping in mind the safety and security of the train passengers in view of the cyclone affecting Gujarat, the Western Railway has decided to cancel another nine trains and short terminate with partial cancellation another four trains, as a precautionary measure in the cyclone-prone areas. Accordingly, a total of 123 trains of the Western Railway have been affected.

Flight services have also been suspended at airports in Porbandar, Diu, Bhavnagar, Keshod and Kandla till Thursday midnight. The effect of Cyclone Vayu has been milder at most of the airports in Gujarat. There has been no damage to any airport infrastructure or facilities has been reported so far.

Widespread rainfall with heavy to very heavy falls at few places and extremely heavy falls at isolated places are likely in Saurashtra and Kutch today. Gale wind speed of 155-165 kmph gusting to 180 kmph is also very likely over Gujarat coast till Thursday evening before it gradually decreases thereafter. The heavy winds are also likely to impact Maharashtra coasts.

Over 3.1 lakh people were evacuated from low-lying areas in Gujarat and Diu. Indian Coast Guard, Navy, Army and Air Force units have been put on standby. Aircraft and helicopters are carrying out aerial surveillance.

The India Meteorological Department has said that the sea condition is phenomenal near Gujarat coast and is likely to be very rough to high along and off Maharashtra coast on Thursday. The IMD has advised fishermen not to venture into the sea till June 15.

Pankaj Kumar, Additional Chief Secretary, said that although the IMD has informed that the cyclone has changed its course, "it may still cause heavy winds and rains, and so we are still on stand-by mode".

The power supply has been disrupted in nearly 560 villages of the state and all efforts are on to restore it. The Gujarat Urja Vikas Nigam Limited (GUVNL) chalked out an action plan well in advance in view of the cyclone threat, the state government-promoted company's in-charge managing director Shahmeena Husain told news agency PTI.

"Around 561 feeder lines in Saurashtra and south Gujarat are affected due to the impact of cyclone Vayu. We are confident that the power supply will be restored soon in the 560 affected villages," she said. The GUVNL teams were finding it difficult to reach some of the water-logged coastal areas, she added.

Meanwhile, All India Fishermen Association president Veljibhai Masani president appreciated the state government for issuing a timely warning to fishermen against venturing into the sea. "Around 8,000 fishermen from Saurashtra region were earlier planning to venture into the sea in about 1,200 boats, but they decided against it after the warning," he said.