In Bihar, the floods triggered by heavy and incessant rains took the death toll to 123 across the state. A total of 81.57 lakh people have been affected across 12 districts. 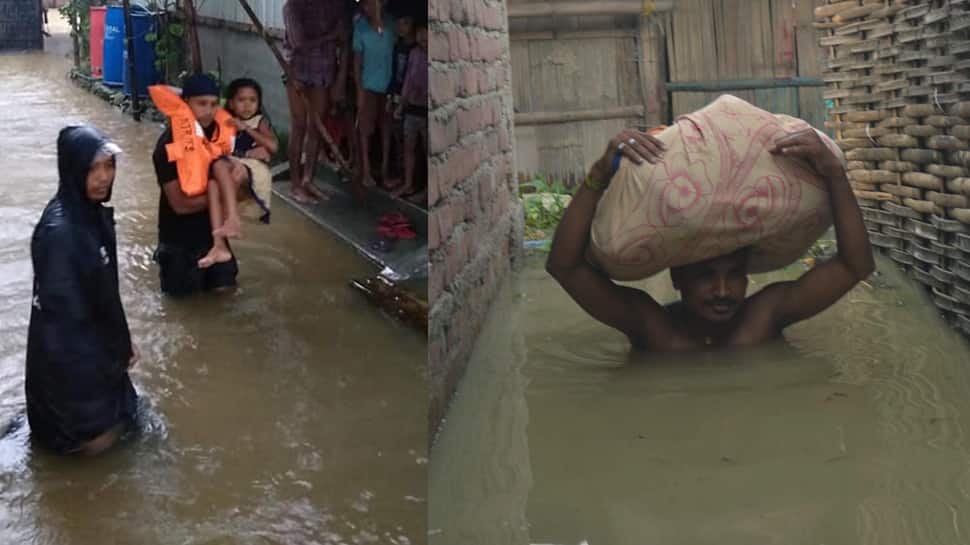 The total death toll due to floods in Bihar and Assam rose to 194 on Wednesday. In Bihar, the floods triggered by heavy and incessant rains took the death toll to 123 across the state. A total of 81.57 lakh people have been affected across 12 districts.

At least 42 relief camps are being run by the government, including at Sitamarhi and Muzaffarpur. A total of 22,400 flood-affected people have taken shelter in the camp. 834 community kitchens are currently running to help the flood victims.

The most affected district is Sitamarhi with a total of 37 deaths, followed by Madhubani with 30 deaths. The death toll in Araria reached at 12, Sheohar and Darbhanga at ten each, Purnea at nine, Kishanganj at five, Muzaffarpur at four, Supaul at three, East Champaran at two, and Saharsa at one.

The meteorological department has issued an alert of heavy rains in Kishanganj, Katihar, Sheohar, Madhubani, Supaul, Araria, and Purnea.

The southern districts of Bihar--Gaya, Nawada, Aurangabad, has received a good amount of rain.

According to Meteorological Department Scientist, Anand Shankar, a good amount of rain will occur for the next two days. On the incidents of lightning in Bihar, the scientist opined that it happens after a long gap of rain. The weather condition leads to lightning and is a common phenomenon.

The Indian Air Force (IAF) has pressed into service two helicopters to provide succour to flood-affected victims in Darbhanga, Sitamarhi and Madhubani districts, according to news agency ANI. The helicopters, which have been stationed at Darbhanga, were deployed by the IAF`s Central Air Command after a request was made by the Bihar government, ANI reported citing an Air Force statement.

A joint assessment of the situation was undertaken by the civil authorities and IAF pilots, the statement said. Food packets and relief material are already being airdropped in the affected areas. This effort would continue to increase in the coming days, according to the IAF.

Around 50 dwelling units in Naruar village of Madhubani district were destroyed due to floods on Tuesday. Residents of Kakarghatti village in Darbhanga were earlier forced to set up temporary shelters on the National Highway 57 after floodwater entered their houses and farms.

On the other hand, in Assam heavy rains has claimed 71 lives and affected 19 districts. At least 28 lakh people have been affected due to the floods.

After some relief, the water has crossed the danger mark and the situation is alarming in Assam. Due to the release of water from Bhutan and heavy rainfall the flood situation has worsened.

A large scale flood relief operation by the Army troops is underway in flood-hit areas of lower Assam since June 11, after the torrential rain hit the region. The intensified downpour has triggered deluge in all districts of the region, disrupting the normal life.

A total of 488 civilians were evacuated along with relief to 450 civilians in past one week, Army personnel said on July 20. On July 18, the divisional forest department in a statement had said that over 50 animals, including five rhinos, died in Kaziranga National Park in Assam floods.