I want to clearly assure my sisters and brothers of Jammu, Kashmir and Ladakh that these regions will develop as per the wishes of local people, their dreams and ambitions, says Prime Minister Narendra Modi. 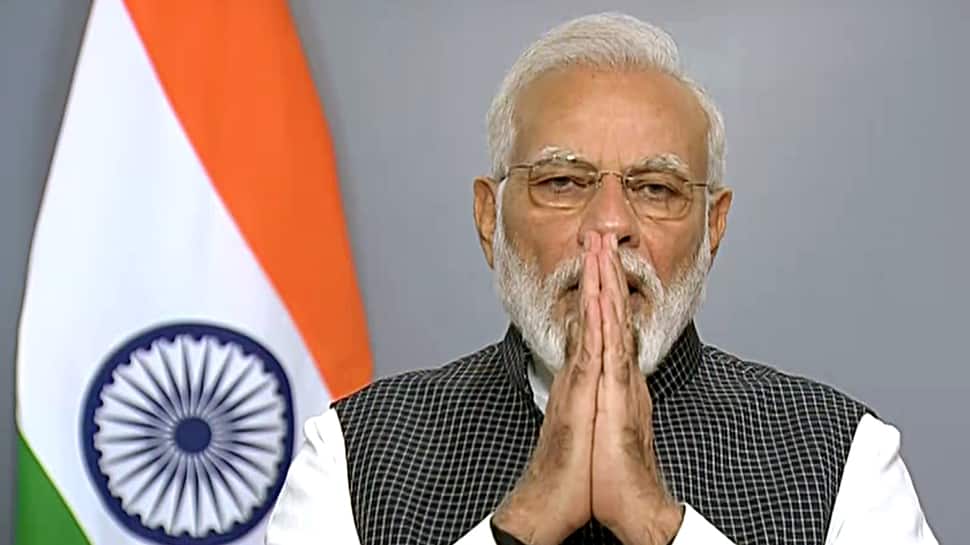 One of the biggest decisions taken by Prime Minister Narendra Modi in the first 75 days of his government is undoubtedly the unshackling of Jammu and Kashmir so that there is better integration and mobility and the faux concept of dual citizenship is scrapped once and for all. In what was not just a political but a diplomatic masterstroke as well, the Prime Minister, who has been obsessed with resolving the Kashmir imbroglio, hit his straps very early on in his second avatar using the heft of his mandate to prise through the contentious issue.

IANS began by asking him about his decision on Article 370 which has been welcomed by many and also been opposed by a few. A fusillade of posers followed. There seems to be an uneasy calm at the moment. Why do you think the people of J&K will stand with you?

Unflinchingly, as his wont and style, PM Modi responded unequivocally, "Please see the list of people who have opposed the decisions about Kashmir - the usual vested interest groups, political dynasties, those who sympathise with terror and some friends in the Opposition. The people of India, irrespective of what their political preference, have supported the steps taken in Jammu, Kashmir and Ladakh. This is about the nation, not politics. The people of India are seeing that tough but essential decisions that were earlier assumed to be impossible are becoming a reality."

As the dragnet eases, life will limp back to normal in the Valley, the PM has a clear view on the issue, he reckons that these provisions actually harmed India, for a handful of families and a separatist cabal capitalised on this. PM Modi said, "It is now clear to everyone how Articles 370 and 35(A) fully isolated Jammu, Kashmir and Ladakh. The status quo of seven long decades clearly could not fulfil people`s aspirations. Citizens were kept away from the fruits of development. The greatest casualty was the lack of any proper economic avenues to increase earnings. Our approach is different -- instead of the vicious cycle of poverty, the people need more economic opportunities. For years, intimidation ruled the roost. Let us now give development a chance."

He followed up by making a fervent plea to his brethren in Kashmir. "My sisters and brothers of Jammu, Kashmir and Ladakh always wanted a better future for them, but Article 370 did not enable it. There was injustice against women and children, ST as well as SC communities. And, most importantly, the innovative zeal of the people of Jammu, Kashmir and Ladakh was not harnessed. Now, from BPOs to startups, from food processing to tourism, many industries can avail of investment and create opportunities for the local youth. Education and skill development will also bloom.

"I want to clearly assure my sisters and brothers of Jammu, Kashmir and Ladakh that these regions will develop as per the wishes of local people, their dreams and ambitions. The growth of these regions will first and foremost be powered by those belonging to these regions. Articles 370 and 35(A) were like chains that kept people tied. These chains are now broken, people have been unshackled from such dominance and they will now shape their own destiny."

For those who are opposing the decisions on Jammu and Kashmir, he believes they should answer one basic question: What is their defence for Articles 370 and 35(A) remaining?

He argued, "They would have no answer to this question. And, these are the same people who are used to protesting when it comes to anything that helps common people. There is a project to provide water to people, they will oppose it. There is a railway track being built, they will oppose that. Their heart only beats for Maoists and terrorists who have only bullied common citizens. Today, every Indian is fully standing with the people of Jammu, Kashmir and Ladakh and I am confident they will stand with us in the aim to boost development and bring peace. "

IANS also asked him about the concerns over democracy. Will the voice of the people of Kashmir be heard?

He said: "Kashmir has never witnessed such a strong commitment in favour of democracy. Remember the turnout during the Panchayat elections? The people voted in large numbers and did not get cowed by bullying. In November and December of 2018, there were 35,000 Sarpanches elected and the turnout in the Panchayat elections was a record 74%. There was no violence during the Panchayat elections. Not a drop of blood was shed in poll violence. This, when the main parties there were lukewarm to this entire exercise. It is very satisfying that now Panchayats are back at the forefront of furthering development and human empowerment. Imagine, for so many years those in power did not find it prudent to work towards strengthening Panchayats. And remember, they gave great sermons on democracy, but the words never led to action."

"Now, I have requested the Honourable Governor to work towards organising Block Panchayat elections too. Recently, the Jammu and Kashmir administration did the `Back to Village` programme, where the entire government machinery went to the people instead of vice versa. They went just to mitigate people`s problems. The common citizens appreciated the programme. The results of these efforts are for all to see. Swachh Bharat, rural electrification and other such initiatives are reaching the grassroots. This is what democracy truly is."

Correcting mistakes and imbalances was at the kernel of the PM`s intent on J&K. The PM said: "In any case, I have assured people that elections in Jammu, Kashmir will continue and it is the people of these regions only who will represent the larger public. Yes, those who ruled Kashmir thinking it is their divine right to do so will dislike democratisation and peddle incorrect narratives. They do not want a self-made, younger leadership to emerge. These are the same people whose own conduct in the 1987 elections has been suspect. Article 370 has helped the local political class avoid transparency and accountability. Its removal will only empower democracy even more."