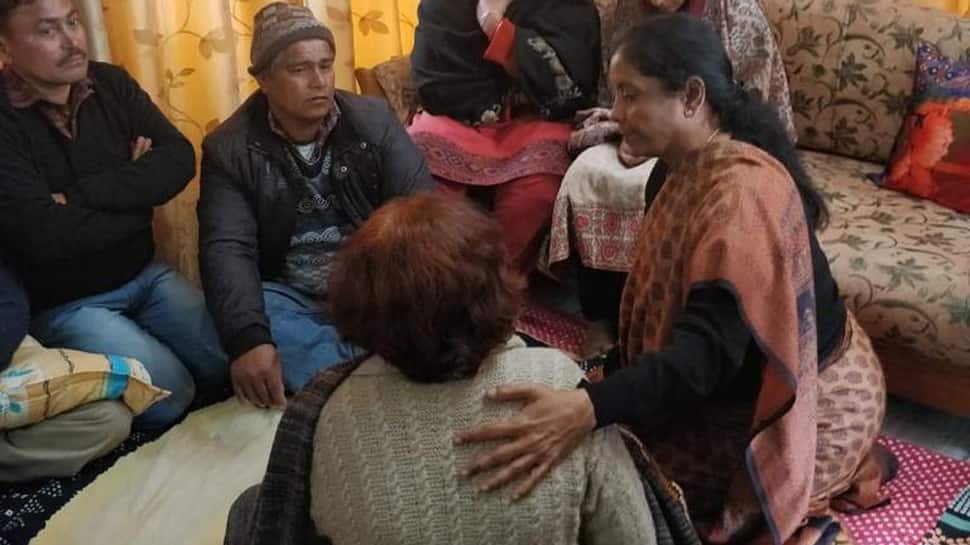 Defence Minister Nirmala Sitharaman on Tuesday met the families of the two pilots who died in the Indian Air Force plane crash on February 1. Squadron Leader Samir Abrol and Squadron Leader Siddhartha Negi had lost their lives after Mirage-2000 trainer aircraft of the Indian Air Force crashed at the Hindustan Aeronautics Limited Airport in Bengaluru.

Though the pilots made a bid to eject, they were caught in the flames as the plane crashed with a huge explosion. The body of one the pilots was completely charred while the second pilot was rushed to the Command hospital.

An eye-witness said the plane went up in flames as it crashed with an explosion and thick smoke billowed from the spot, leaving passersby and residents living around the airport in a shock.

Soon firefighters and ground staff at the airport swung into action to douse the flames and tried to bring out the pilots.

Squadron Leader Negi was cremated on Saturday morning in Bengaluru with full military honours by the air force in the presence of his family, including his widow. His senior colleage Squadron Leader Abrol's body was taken to Ghaziabad where his last rites were held with full state honours.

Squadron leaders Samir Abrol and Siddharth Negi who died in the crash were test pilots from the Aircraft and Systems Testing Establishment (ASTE). They were to test the recently upgraded aircraft before its induction into IAF.

The crash of Mirage 2000 jet in Bengaluru has brought Hindustan Aeronautics Limited (HAL) under the lens as the aircraft was on an acceptance sortie after being upgraded at the state-run aircraft production facility.

This is the second crash of HAL-handled aircraft after a Jaguar came down near Khushinagar in Uttar Pradesh four days before this accident.

This is not the first time that an IAF fighter jet has crashed while being tested at a HAL facility. In July 2018, an Su-30 had crashed in Nashik where the Russian-made aircraft is produced by HAL for the IAF.

The Mirage fleet of the IAF comprising 51 aircraft is being upgraded to Mirage 2000-5 version under a $2.1 billion deal with French aircraft maker Dassault and other partners.