Defence Minister Rajnath Singh mocks Pakistan for 'running pillar to post' over J&K, says talks will happen only on PoK

Mocking Pakistan, Defence Minister Rajnath Singh said, “We removed Article 370 and the neighbour is getting weak. They are running across the world and even threatening us intermittently.” 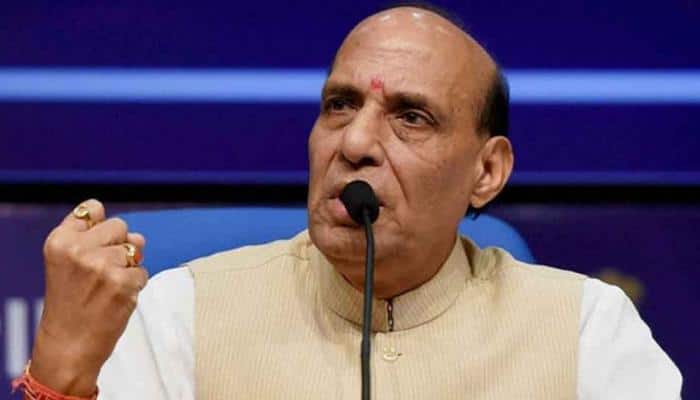 Union Defence Minister Rajnath Singh on Sunday said that talks would happen with the neighbour only on the issue of Pakistan-occupied-Kashmir (PoK). Hitting out at Pakistan, which has been sulking since Prime Minister Narendra Modi-led NDA government announced abrogation of Article 370 and bifurcation of Jammu and Kashmir, the Defence Minister said that the neighbour has been running from pillar to post throughout the world.

Mocking Pakistan, he said, “We removed Article 370 and the neighbour is getting weak. They are running across the world and even threatening us intermittently.”

Referring to a recent meeting between US President Donald Trump and Pakistan Prime Minister Imran Khan, Singh further said that “when the country went to Trump, even he chased them away”.

The Bharatiya Janata Party (BJP) leader, who has also held the post of party president in the past, also used the opportunity to hit out at political opponents and critics, saying, “They used to say that nobody can even touch Article 370 and if BJP does so, it will never come to power.”

Singh added that the BJP-led NDA government at the Centre abrogated Article 370 “within minutes”. “We never indulged in politics of power. We had mentioned it (abrogation of Article 370) in our manifesto and we fulfilled the promise,” said the Defence Minister.

The latest attack on Pakistan by the Defence Minister comes just days after he suggested that India’s nuclear weapon policy of ‘no first use’ might change depending upon “future circumstances”.

Speaking in Pokhran on Friday, he had said, “Pokhran is the area which witnessed Atal Ji’s firm resolve to make India a nuclear power and yet remain firmly committed to the doctrine of ‘No First Use’. India has strictly adhered to this doctrine. What happens in future depends on the circumstances.”

Notably, Pakistan has approached several countries as well as the United Nations Security Council (UNSC) against India’s move to end special status for Jammu and Kashmir. However, the neighbouring country was snubbed from everywhere as global powers acknowledged that New Delhi’s move was in accordance with the Indian Constitution.