Ram Rahim is currently jailed at Sunaria jail in Haryana's Rohtak and he had applied for a parole of 42 days to look after his fields in Sirsa. 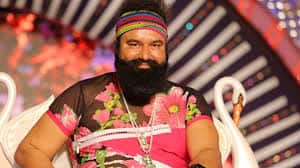 CHANDIGARH: Incarcerated  Dera Sacha Sauda chief Gurmeet Ram Rahim Singh on Monday withdrew his parole application which he had applied in order to carry out some agricultural activities at his fields in Sirsa, Haryana.

Ram Rahim is currently jailed at Sunaria jail in Haryana's Rohtak and he had applied for a parole of 42 days to look after his fields in Sirsa. It may be recalled that Ram Rahim was sent behind bars after being convicted in two rape cases and murder case of a journalist. Haryana government had asked the district administration to take a final decision over Ram Rahim's parole plea.

Few days ago, Haryana Jail Minister Krishan Lal Panwar had said that in its report the jail superintendent had said that Ram Rahim's conduct in prison is good. Pawar, however, had said that the final decision to grant parole to the Dera chief lies with Police commissioner. After receiving the application, Sirsa Police had asked the Revenue Department to ascertain how much land the Ram Rahim owns in his name.

It is to be noted that Ram Rahim was convicted in rape cases on August 25, 2017 and minutes after the court had pronounced the judgement, large-scale violence had erupted in different parts of Haryana as his followers took to streets and damaged public property. The violence had resulted in deaths of 36 people.

In January this year, a special court had also sentenced Ram Rahim three others to life imprisonment for murdering a journalist 16 years ago.