A four-member Trinamool Congress (TMC) delegation, led by senior party leader Derek O'Brien, were stopped by the Varanasi Police on Saturday, ahead of their visit to Sonbhadra district where 10 people were killed in firing over a land dispute on July 17. 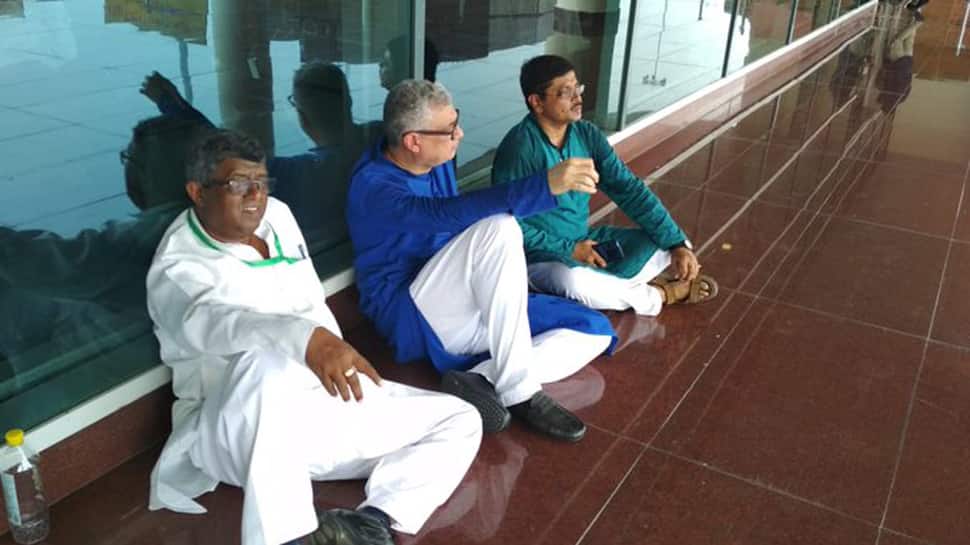 Varanasi: A four-member Trinamool Congress (TMC) delegation, led by senior party leader Derek O'Brien, were stopped by the Varanasi Police on Saturday, ahead of their visit to Sonbhadra district where 10 people were killed in firing over a land dispute on July 17. The delegation was stopped at Lal Bahadur Shastri International Airport in Uttar Pradesh's Babatpur, near Varanasi.

The delegation, allegedly detained, has claimed that Additional District Magistrate and the Superintendent of Police did not inform them under which section/s they have been detained.
Derek said the police officers while stopping them at the airport, said they were "doing as told from topmost".

"Trinamool Parliam delegation detained at Varanasi airport. ADM,SP have not told us under which section.("Doing as told from topmost"). We have told them that we will cooperate, wish to meet injured & then proceed to Sonbhadra to meet & give confidence to grieving families - Derek (sic)," a tweet by Trinamool Congress read.

Trinamool Parliamentary delegation detained at Varanasi airport.ADM,SP have not told us under which section.(“Doing as told from topmost”).We have told them that we will cooperate,wish to meet injured &then proceed to Sonbhadra to meet &give confidence to grieving families: Derek

In a video message posted on the TMC's Twitter handle, Derek said that they have been detained at the Varanasi airport and have not been allowed to meet the families of the victims admitted at the Banaras Hindu University trauma centre. They further specified their "intentions" and said that they will cooperate with the police and will meet the grieving families in Varanasi before proceeding towards Sonbhadra.

Video message from Trinamool delegation who have been detained/arrested (they still haven’t been told why!) at Varanasi airport tarmac. They were on their way to meet the injured in hospital and meet & give confidence to the grieving families in #Sonbhadra
Watch>> pic.twitter.com/1cSjPfZ7cT

The development comes hours after Congress leader Priyanka Gandhi Vadra and her convoy were stopped in Narayanpur by the police from proceeding towards Sonbhadra. She and nine others were instead taken to a guest house in Mirzapur where Priyanka spent the night in detention.

Refusing to fill the bail bond of Rs 50,000, Priyanka sat on a dharna overnight insisting to go to Sonbhadra and is continuing her protest outside the Chunar Guest House on Saturday.
The Congress general secretary arrived in Varanasi on Friday and met the injured persons admitted to the Trauma Centre of the BHU.

When she was going to Sonebhadra, her convoy was stopped on the Mirzapur border. Priyanka, then, squatted on the ground with the Congress workers and was later taken away in a government vehicle to Chunar.

"The Uttar Pradesh government has sent ADG Varanasi Brij Bhushan, Varanasi Commissioner Deepak Agarwal, Commissioner Mirzapur, and DIG Mirzapur to tell me that I should return without meeting the victims` families. They have not given me any reason or documents for detaining me," Gandhi said in a tweet in the early hours of Saturday.

However, the police denied that she had been arrested. At least 10 people, including three women, died and over 24 were injured in a clash between Gond and Gujjar communities over a land dispute in Sonebhadra on Wednesday.

The police have arrested 29 people, including the kingpin Yogesh Dutt, in connection with the violence in Sonebhadra. A case has been filed against 78 people.