DNA Exclusive: Are India-China heading towards Galwan 2.0? All details on LAC standoff here

Zee News Editor-in-Chief Sudhir Chaudhary on Monday (October 11) discussed the ongoing standoff between Indian and China at LAC which is feared to escalate in the future. 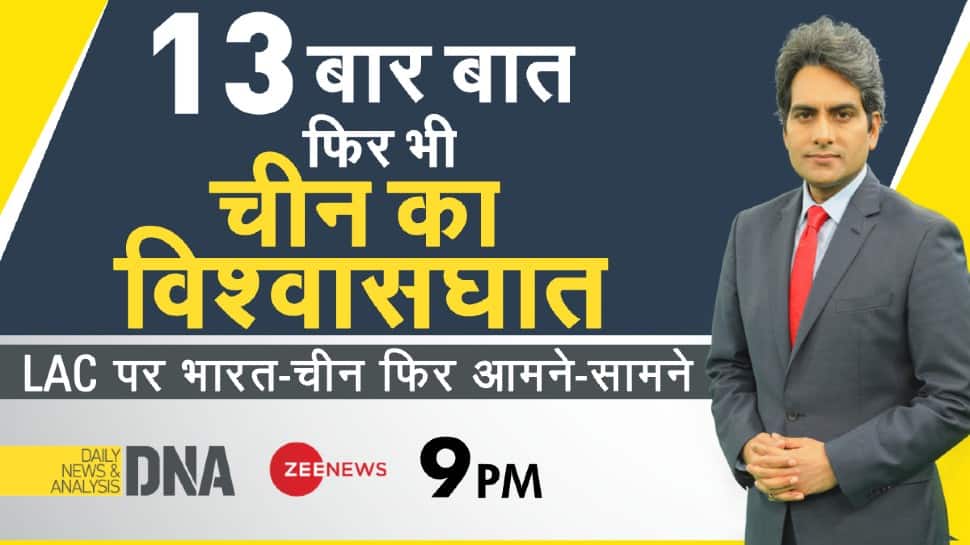 New Delhi: The relations between India and China have taken a dangerous turn. Yesterday, the 13th round of meeting was held on the ongoing border dispute between the two countries and the statements issued by both countries following the meet signal a grave threat.

Zee News Editor-in-Chief Sudhir Chaudhary on Monday (October 11) discussed the ongoing standoff between Indian and China at LAC which is feared to escalate in the future.

The statement released by the Indian Army after the talks indicates that India no longer has faith in China. It is the toughest statement from India on China so far. The Indian Army has said that China is not ready to vacate Indian territories. On the other hand, China has also made a similar statement and said that India is adamant on its “unreasonable demands”.

Today China's state media even threatened India that if a war starts then India's defeat is certain and China will not accept any international pressure in this matter.

On behalf of the Ministry of External Affairs of India, it has been said that China has refused to accept the constructive proposal presented by it to resolve the border dispute in this meeting. But China did not present any proposal in this direction, due to which there was no agreement between the two countries on the areas under dispute.

At present, there is a dispute on the LAC in eastern Ladakh over Hot Springs, Depsang and Charding Nullah Junction.

There is an apprehension that India’s borders with China may change to Line of Control instead of Line of Actual Control. At present, the border we share with Pakistan in Jammu and Kashmir is called LoC and the border with China is called LAC.

At LoC, the boundaries are clearly marked with soldiers of both the countries standing here face to face, which is also called soldier to soldier marking.

But the situation is different at LAC. Here, there is no consensus between the two countries on the actual border and both have different claims. For this reason, there is no soldier to soldier marking on the LAC. Instead, a buffer zone of 50 to 100 km is created, where the army is not deployed.

Now if LAC turns into LOC, then this buffer zone of 50 to 100 km will be eliminated and the armies of both the countries will stand face to face. If this happens, the kind of infrastructure India has built with Pakistan on the LoC, it will have to do the same against China.

The important thing  to note here is that while the LoC which India shares with Pakistan is only about 700 km longs, whereas the LAC runs about 3500 km. That is, if LAC turns into LoC, then it will be a big challenge.

In such a situation, India will have to fight on two fronts. On one side there will be Pakistan and on the other will be China.

After the violent clashes in Galwan Valley last year, the second winter is about to arrive. The deployment of troops in winter can be very challenging. If the situation doesn’t get better and if LAC turns to LoC, India will have to deploy more troops in front of the Chinese army. In such a situation, the fear of another violent confrontation will certainly be there.