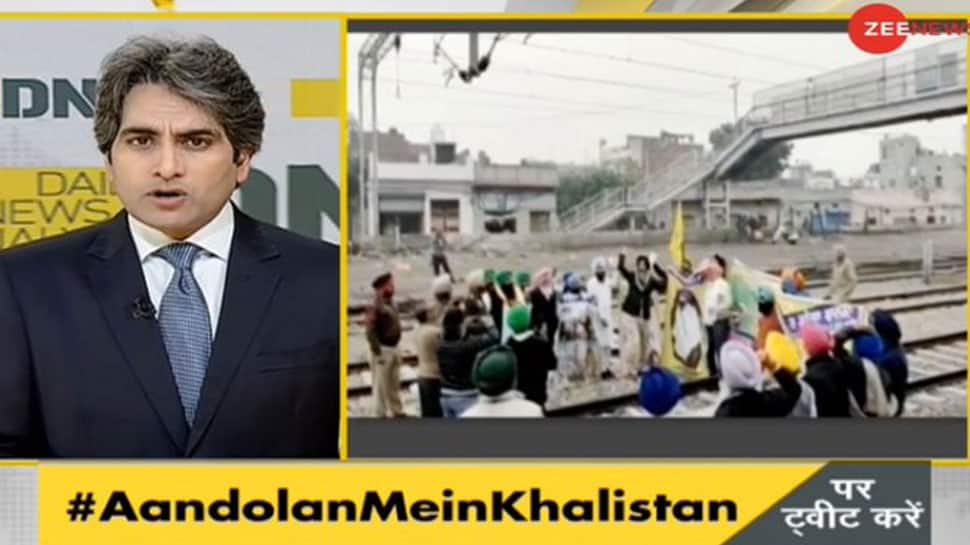 NEW DELHI: Farmers of Punjab have been agitating against the recent farm laws passed by the Central government for the past two months. The farmers from mostly Punjab and Haryana had blocked the roads and railway tracks to press the Centre to repeal these laws. Under the aegis of various farmers' bodies, they have been demanding that the Centre make amendments to the Agricultural Bills (Farm Bills 2020) or repeal them.

Intensifying their ongoing protest, the farmers had given a call for ‘Delhi Chalo’ during which thousands of them clashed with the police, defied barricades on their way and braved tear gas and water cannons as they marched towards the national capital on Friday.

Even as the whole nation stood witness to the farmers’ stir, one of the protestors threatened Prime Minister Narendra Modi which was caught on camera by the Zee News team. This incident has led to suspicion about external elements hijacking what could have been a peaceful farmers’ agitation with the back support of anti-BJP political parties.

Zee News Editor-in-Chief Sudhir Chaudhary raised this issue in his extremely popular show DNA and the channel sought to know if extremists are actually controlling the farmers’ protest.

Lets us first show you what this protestor said about PM Modi. In full public view, this man threatened that PM Modi will meet the same fate as that of former PM Indira Gandhi. Clearly, this kind of remark can’t be made by a simple farmer. This is the language of the Khalistan extremists, and now this incident points to their involvement in the farmers’ agitation.

Now lets us show you another picture from Punjab’s Barnala. The posters in the hands of the protesters are of the slain Khalistani terrorist, Bhindranwale. It may be recalled that the then Indira Gandhi government at the Centre had given orders for Operation Blue Star just to flush out this Khalistani terrorist from the interiors of the Golden Temple.

It was shortly after the successful execution of this operation that Prime Minister Indira Gandhi was shot dead by her own Sikh security personnel. It seems like an attempt is being made to vitiate the peaceful environment and create a 1984-like situation in the country once again.

It is obvious that those threatening the PM cannot be called farmers. So, this farmers' movement appears to have been hijacked by political parties and the Khalistani extremists.

As we talk about the farmers’ stir, a picture of our former PM Lal Bahadur Shastri ploughing a field also comes in our mind. The country was going through a major agrarian crisis back then when Shastri Ji gave the slogan of ‘Jai Jawan, Jai Kisan’ - a message to the countrymen that farmers should produce more to make the country self-reliant.

Those were the times when the farmers used to get respect like soldiers but sadly, today farmers have become a pawn of politics.

About 10,000 farmers from Punjab wanted to reach the capital of the country, Delhi, to protest against the new farm laws. Today, when these farmers reached the Singhu border near Delhi, they were stopped there by the security forces.  The Singhu border connects Delhi and Haryana and the distance from this point to Parliament is only 36 kilometres.

During their demonstration, the farmers clashed with the police, there were reports of stray violence at several places. The police had to resort to tear gas shells and water cannons to disperse them. Surprisingly, some farmers pelted stones on the police, waved swords, broke barricading and even attacked the policemen with rods and sticks.

Despite all this, the farmers were allowed to enter Delhi and they can now gather at the Burari Maidan and continue their agitation from there. The distance from the Parliament to Burari Maidan is just 20 km, though only 500 farmers have managed to reach this ground till now.

Though farmers want to press forward their demands, in the guise of their protest, many parties want to execute their own political agenda. In this kind of situation, terrorists like the Khalistani separatists are taking advantage of the farmers’ protest and making attempts to vitiate the atmosphere.

Apart from the Singhu border, today a large number of farmers also gathered at Tikri Border, Ambala and Panipat, located between Delhi and Haryana and similar pictures of protests were seen at all these places.

It may be recalled that the central government recently enacted three new farm laws - the first one is related to Agriculture Produce Markets Committee (APMC). Under this law, farmers will be able to sell their crops to other buyers besides government mandis.

Prices in mandis are fixed at MSP. MSP is a fixed price from the government. Farmers will be able to sell their crop by moving away from their city to another state. This law also allows farmers to sell crops through online systems.

Overall, in the backdrop of the farmers' movement, there is a big role being played by regional parties for vested interest and vote bank politics. Setting tractors on fire, blocking rail tracks, issuing press statements in English, initiating hashtag trends in support of their movement and giving big ads in newspapers can just be an easy task for simple and honest farmers.

Hence, this suggests that the reins of their movement are now in the hands of political parties. Parties like the Congress, Akali Dal and Aam Aadmi Party are taking maximum advantage of this situation. And with Khalistani terrorists taking advantage of the situation, one can clearly imagine which way the Kisan Movement is headed and what will be the likely outcome.

Parties like Congress, Aam Aadmi Party and Shiromani Akali Dal want to use this movement to the hilt; they have no concerns for the plight of poor farmers, who have just become a puppet in their hands.