India's first war that it fought merely two months after independence in 1947 is a lesser-known fact. It, however, completely changed the future of India. 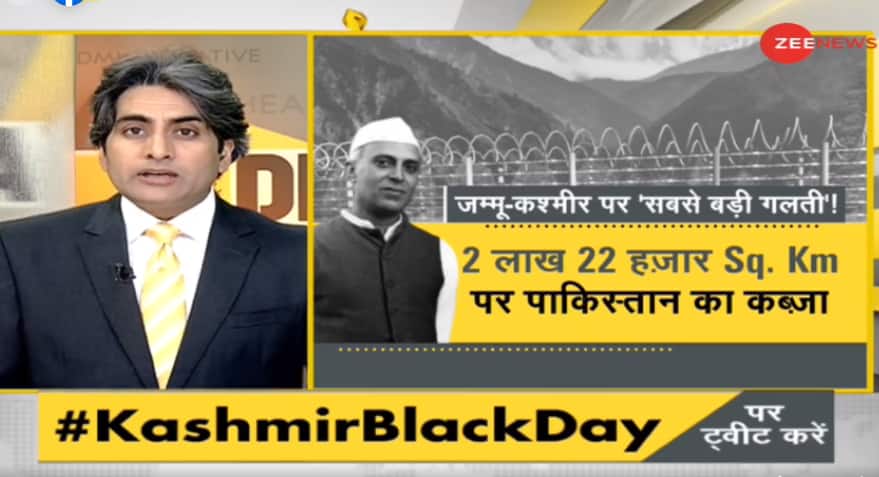 New Delhi: If you are asked how many wars India has fought since independence, you may probably name the 1962 war with China, 1965 and 1971 wars with Pakistan, and then the Kargil War of 1999. India's first war that it fought merely two months after independence in 1947 is a lesser-known fact. It, however, completely changed the future of India.

The DNA report today will delve deep into this first war of independent India and tell you about the bid conspiracy that termed this war as an invasion by marauding tribes.

On August 15, 1947, India emerged as a new nation with a secular and democratic country, but Pakistan failed to digest this fact and conspired to snatch the Muslim majority state of Kashmir that was ruled by Hindu Raja Hari Singh. When leaders of India were celebrating India's independence, Pakistan's army was busy hatching conspiracy to usurp Kashmir by hook or by crook.

Pakistan implemented this plan 73 years ago on this day, October 22, 1947. Thousands of tribesmen from Pakistan invaded Kashmir and defeated Raja Hari Singh's state Force and marched from Muzaffarabad to Srinagar. Muzaffarabad is today the capital of Pakistan Occupied Kashmir.

22nd October 1947 proved to be a black day in the history of India because, after the ceasefire, India had lost about 91,000 square kilometer area of Kashmir. This lost portion of land is equal to the size of countries like Hungary, Portugal, and Jordan. This part of India is now called Pakistan Occupied Kashmir whereas Pakistan calls it free Kashmir.

In the pages of history, this Black Day (October 22) was deliberately erased and people also forgot this day gradually. On the contrary, Pakistan still celebrates 26th and 27th October as Black Day. King Hari Singh of Kashmir had signed on the document of Jammu and Kashmir's accession to India on 26th October 1947, and the next day, 27th October, India Army landed here to liberate Kashmir from the clutches of tribes.

The war that started in October 1947 lasted till December 1948. It is the longest war of independent India to date as it lasted for 2 months and 2 weeks, but it is not considered a war. India's war with China lasted only one month in 1962, 1965 war with Pakistan lasted only 17 days, 1971 war against Pakistan was fought for 13 days and the 1999 Kargil war lasted 60 days. It is surprising to know that the war India fought for 14 months is faded from the memory of people.

Codenamed as Operation Gulmarg, the brainchild of the Pakistan Army was meticulously planned against independent India under the guise of tribal invasion. This revelation is made by a former Pakistan Army officer in one of his books, Raiders In Kashmir. Major General Akbar Khan, who authored this book, was a Brigadier in the Pakistan Army in 1947. He was also the Director of Weapons and Equipment in the General headquarters of the Pakistan Army.

Akbar Khan was aware of the fact that Raja Hari Singh's army in Kashmir has only 9000 jawans and 2000 of them are Muslims. Pakistan had thought that these Muslim soldiers of Hari Singh's state Force would support it, and this belief made Pakistan Army officers overconfident.

The second chapter of Major General Akbar Khan's book titled as 'The Reason Why' explains why Pakistan had sent the tribesmen to invade Kashmir. The book says that the size of India at that time was 46 lakh square kilometers with 568 princely states where 40 crore people lived. Of these princely states, Jammu and Kashmir were the second largest. This state was geographically important not only to India and Pakistan but also for the entire Indian subcontinent.

The geographical location of Jammu and Kashmir was such at that time that there was only Afghanistan between north Kashmir and the Soviet Union of that time. Ever since Britain announced the partition of India, Pakistanis felt that Kashmir would go with them. Pakistan always considered Kashmir as its integral part and Akbar Khan writes that in Pakistan's spelling 'K' stands for Kashmir.

According to Akbar Khan, since the Indian subcontinent was being divided on the basis of the Hindu and Muslim populations, Kashmir was expected to go with Pakistan. At that time 75 percent population of Kashmir was of Muslims. The Jammu and Kashmir spread across 2 lakh 18 thousand square kilometers was not connected to India by road, rail, or rivers and there hardly any economic relation between India and Kashmir. These were the facts about Kashmir that became the basis of Pakistan's design to usurp Kashmir.

Akbar Khan also writes that the founder of Pakistan, Mohammed Ali Jinnah, also believed that geographically Kashmir has no choice but to go with Pakistan. Jinnah also believed that the people of Kashmir were very enthusiastic about Pakistan, therefore, he was not bothered about leaders like Sheikh Abdullah.

The attack on Kashmir in 1947 was also considered to part of an international conspiracy, which suited Pakistan. Kashmir was not a matter of choice but a matter of necessity for Pakistan, which was afraid that if the Indian army came to Kashmir, it would easily keep an eye on Pakistan.

Major General Akbar Khan's book, Raiders In Kashmir, writes that before the attack on Kashmir, he met a Muslim League leader named Mian Ift-Kharuddin, who had asked Akbar Khan to make a plan to annex Kashmir so that it could be shown to Pakistani leaders in Lahore. He also advised him to take special care that no one knows about the involvement of the Pakistani army or Pakistani officials in it.

Akbar Khan was very enthusiastic about his plan and he also explained to many Pakistani government officials the importance of occupying Kathua Road and Srinagar in Jammu and Kashmir. The officials had then fixed Akbar Khan's meeting with the then Pakistan's Prime Minister Liaquat Ali Khan, and Akbar Khan was promised that he monetarily compensated.

Subsequently, on 22nd October, the tribesmen launched their first attack on undivided Kashmir's Domail and then captured Muzaffarabad on 23rd October. By the 25th of October, they had captured Uri and their next target was Baramula, which was captured on the 26th of October. From Baramulla, the distance of Srinagar is merely 50 km and this was the next target of the Pakistan Army and the tribesmen.

Witnessing the ferocious attack of the tribesmen, Maharaja Hari Singh of Jammu Kashmir signed the instrument of accession on 26th October and merged his state with India. The same day, Pakistan declared Muzaffarabad as the capital of Azad Kashmir.

On the next day, 27th October, Indian forces started landing at Srinagar airport and from there Pakistan's plan to capture Kashmir collapses. When the tribesmen could not move beyond Baramulla, the Pakistan authorities asked Major General Akbar Khan if he would take responsibility for further attacks with a pre-condition that nowhere should come Pakistan's army role.
Akbar Khan agreed to this, but when he reached just 6 kilometers away from Srinagar, he realised that the Indian Army had blocked all the roads ahead and it was impossible for the tribes to move forward. This was the turning point in the war that also foiled Pakistan's Kashmir plan forever. After two days, the Indian Army started moving forward and by 7th November 1947, the tribesmen were pushed to Uri.

Although the tribesmen had started retreating from October 27, 1947, half of Kashmir spread over 2,22,236 square kilometers had gone to Pakistan, which later handed over parts of it to China.

Do you know why did India fail to occupy PoK even after pushing back the tribes? Because the then Prime Minister Jawaharlal Nehru took this dispute to the UN Security Council on January 1, 1948, and the dispute became an international issue.

Abrogation of Article 370 unacceptable, will fight against it: PDP