DNA Exclusive: 'Jihad' for religious conversion in India - Part 2, here's how certificates were given

Zee News Editor-in-Chief Sudhir Chaudhary on Tuesday (June 22) discussed the religious conversion racket which targeted the differently abled persons and explained how the conversion certificates were issued on the basis of notarised affidavits. 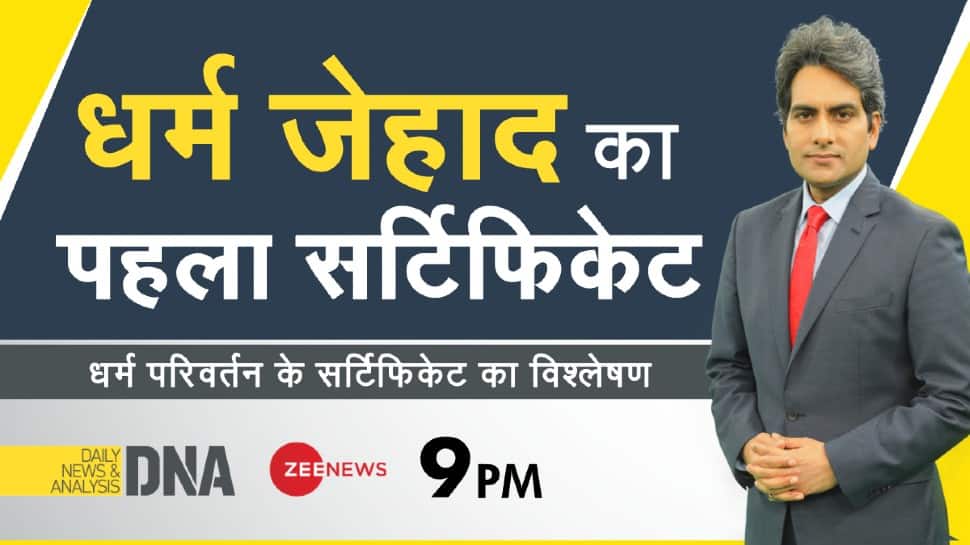 New Delhi: A shocking incident has come to light in which a 22-year-old man, who could not hear or speak, underwent religious conversion from Hinduism to Islam. Mannu Yadav, whom his family had sent to study in a special school in Noida, became Abdul Mannan through an affidavit.

Zee News Editor-in-Chief Sudhir Chaudhary on Tuesday (June 22) discussed the religious conversion racket which targeted the differently abled persons and explained how the conversion certificates were issued on the basis of notarised affidavits.

The ‘conversion certificate’ of Mannu Yadav says that he has renounced Hinduism and accepted Islam and that and from now on his name would be Abdul Mannan. The certificate has the signature of the cleric and the stamp of the Islamic Dawah Center. It says that the certificate has been issued on the basis of a notary affidavit.

However, the date of issuance of the certificate has been mentioned as November 11, 2021 which cannot possibly be correct. But the same mistake was done at two places. This raises questions on the authenticity of the document.

Moreover, it is written that Abdul Mannan's father Rajiv Yadav a resident of Gurugram, while his father says that he had no knowledge about it.

It is written in the certificate that Mannu Yadav accepts Islam voluntarily. But how can a person, who cannot hear or speak and understands only sign language, take such a big decision on his own?

In this Deaf Society, many students have been converted in the past and this fact was admitted by the director of the society, Ruma Roha, in the inquiry conducted by ATS in Lucknow today.

This is a grave matter and the Uttar Pradesh police have arrested two people in the case.

Today, Union Minority Affairs Minister Mukhtar Abbas Naqvi clarified the stand of the government and said that strict action will be taken in such cases.