At the centre of this revelation are the arrested close friends of Dawood Ibrahim in Britain between 2018 and 2019 on charges of money laundering. Among them, Aaron Alim Yusuf and Ranjit Singh Bindra were arrested in 2019, while the British police nabbed Jabir Motiwala, who looked after Dawood's international business in 2018. 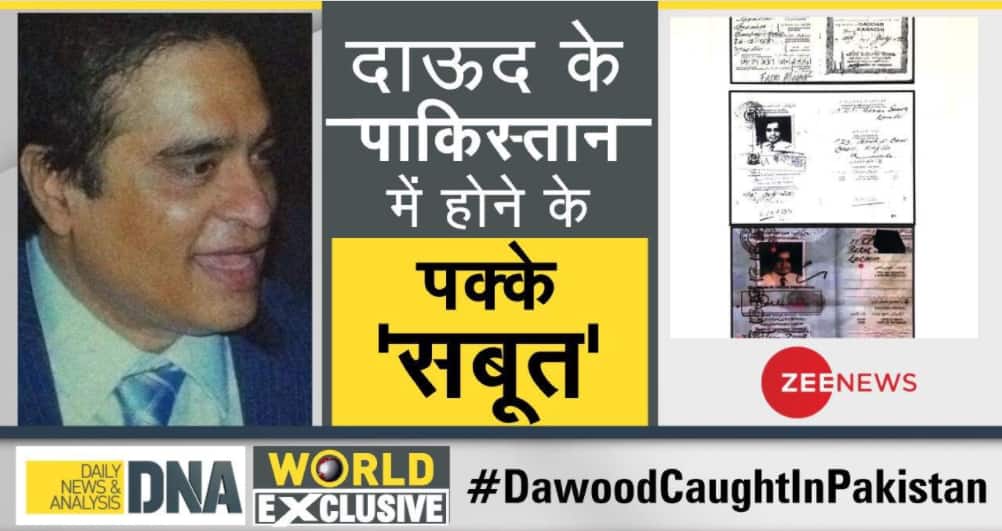 New Delhi: India's most wanted terrorist Dawood Ibrahim lives in Karachi's posh area where Pakistan's top officials along with top army personnel reside, according to DNA's exclusive report. All documents related to this expose is in the possession of Zee News.

At the centre of this revelation are the arrested close friends of Dawood Ibrahim in Britain between 2018 and 2019 on charges of money laundering. Among them, Aaron Alim Yusuf and Ranjit Singh Bindra were arrested in 2019, while the British police nabbed Jabir Motiwala, who looked after Dawood's international business in 2018.

The US investigative agency FBI also sought Zabir Motiwala whom Britain would soon hand over to America because Zabir was allegedly involved in drug racket and carried out money laundering. A UK lower court has already allowed the extradition of Zabir and he may soon be handed over to the US.

The DNA got the exclusive details about Dawood and his family from the interrogation reports of the close acquaintances of the don. He is not only in Pakistan but has also got the support of the Imran Khan government and its intelligence agencies. According to available information, Dawood Ibrahim lives in Karachi, and his house address is D-13 Block 4, KDA Scheme 5, Clifton, Karachi, Pakistan.

Located in the area of ​​Defense Housing Authority of Karachi, it is one of the most expensive and safe areas of Pakistan as top army officers live there. Dawood's brothers Anees and Noora Ibrahim live close to his house in the same area, which also houses Consulate of Russia.

The disclosure about underworld don and mastermind of 1993 Mumbai attacks has been made by Pakistan for the first time on August 18, when it issued a notification that Dawood Ibrahim was in Karachi. It also imposed a ban on him on the basis of this notification. Under these restrictions, all the bank accounts of Dawood Ibrahim were to be frozen along with putting a ban on his movements. This notification also included Dawood's address in Karachi, other fake names and details of his passport.

Pakistan submitted this list with Financial Action Task Force (FATF) to avoid its inclusion in the FATF's Black List. After three days, it refused to acknowledge that Dawood was in Pakistan after three days, and its Foreign Ministry on Saturday refuted all the reports, adding that the list was given to it by the United Nations.

Dawood Ibrahim's presence is also known to America that is why it had declared him an international terrorist. The United Nations is also aware of this fact, the reason, his name is included in the list of banned terrorists. Surprisingly, Dawood's name does not find mention in Pakistan's list of terrorists. Pakistan's National Counter Terrorism Authority that works under the supervision of Prime Minister Imran Khan seems to have deliberately avoided including Dawood's name the list terrorists.

The DNA report, however, will reveal all the details. For the first time, we will tell you about Dawood's family and show you passport details of his family members, besides the details of their bank accounts and properties. According to details available, Dawood's family consists of 9 members. His wife's name is Mahzabeen Sheikh, his son Moin Nawaz's wife is Sania Moin Sheikh. Dawood has three daughters; the first is Mahrukh Junaid Miandad who is married to Junaid Miandad, son of former Pakistan cricketer Javed Miandad; the second daughter is Mahrin whose husband is Aurangzeb Mehmood; while the third daughter Mazia Sheikh.

Dawood also operates under the name of Sheikh Dawood Hasan in Pakistan and got his Computerized National Identity Card (CNIC) in 2015. His CNIC number is - 4 2 3 0 1 2 7 3 90 90 9. CNIC number is an identity card of Pakistani citizens like we have Aadhaar card in India. Dawood Ibrahim was also issued a passport at his Karachi address in the name of Dawood Hasan Sheikh.

The passport of Dawood's wife Mahzbeen Sheikh contains details of Karachi house. Mahzabeen Sheikh is also known as Zubina Zarin and was issued this passport in 2015 besides a CNIC number. Mahzbeen Sheikh also looks after Dawood's business and he runs his financial activities in her name. His 32-year-old son Moin Nawaz often travels to Dubai and London and looks after his father's smuggling, narcotics and hawala racket.

According to sources in Britain and America, Pakistan's intelligence agency ISI is training Moin Nawaz so that he can spread Dawood's business to different countries of the world, but Dawood's closest ally Chhota Shakeel is not happy with Moin's entry. The ISI is reportedly trying to resolve the matter between the two.

Dawood's daughter-in-law, Sania Moin Sheikh, wife of Moin Nawaz, also lives at Dawood's house in Karachi and looks after his investments in London. Dawood's 34-year-old eldest daughter Mahrukh Junaid Miandad's passport, CNIC number and all other details are currently in the possession of Zee News. Her husband Junaid Miandad is involved with the D Company and has been entrusted with many responsibilities.

Dawood's second daughter, Mahreen Mahmood, is 33-year-old, and she lives with her husband Aurangzeb in Karachi - House Number 64, KHE Amir Khusro, Phase 6, DHA, Karachi-Pakistan. Dawood's youngest daughter Mazia Sheikh is 23-year-old and she lives with her father. Among other details available with Zee News include the bank accounts of Dawood's family, which own 23 properties. Of these, 9 properties are in Islamabad, 10 in Karachi, 3 in Dubai and one in London.

You must have heard about the relationship between Bollywood and the underworld. Dawood Ibrahim once had a great influence in Bollywood and similar relations he has now cultivated with film stars in Pakistan. This relation was exposed in 2019 when a Pakistani actress was awarded a big civilian award Tamga-e-Imtiaz. The 37-year-old actress Mehwish Hayat was hardly known until a few years ago, but now she has become a big face of Pakistan's glamour industry.

When she was given the Tamga-e-Imtiaz, a lot of people raised questions about her contribution to Pakistan's glamour industry. A news portal wrote that Pakistan's film industry is shocked and added that Mehwish Hayat was honoured because of her relationship with a powerful man living in Karachi. The man was reported to be close to the ruling party of Pakistan.

The most powerful person currently living in Karachi is no doubt Dawood Ibrahim, who is calling shots in Pakistan's government, military and intelligence agencies. He is in constant touch with the actress, who is also known to be his biggest weakness nowadays.