A nine-cm wide terracotta artifact lies in Hong Kong, in the possession of an art dealer, but the inferences and interpretations from it could possibly lead to interesting revelations about the time period of the Indian epic Mahabharata and its occurrence. 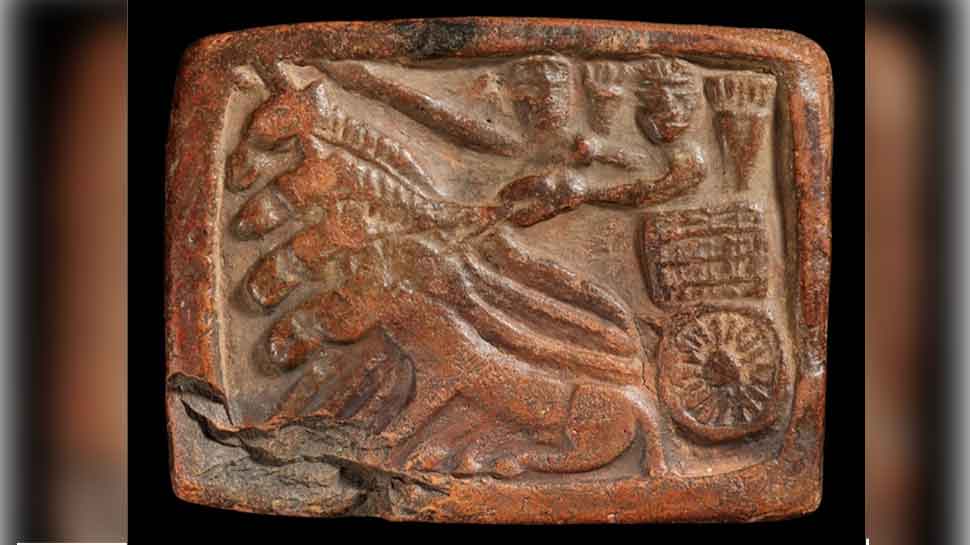 A nine-cm wide terracotta artifact lies in Hong Kong, in the possession of an art dealer, but the inferences and interpretations from it could possibly lead to interesting revelations about the time period of the Indian epic Mahabharata and its occurrence.

Curious to know more about the tablet, Jeremy Pine, the owner had sent a picture of it to Dr Nanditha Krishna, CPR Institute of Indological Research and requested her to share her interpretations of the same and its historical significance. Dr. Nanditha along with other historians and domain experts had studied the image and historical texts to draw inferences.

According to a document shared with the media, the tabled is said to have been authenticated by Oxford Authentication using Thermoluminescence (TL testing) on May 14, 2019. The result of which states that the terracotta was fired between 2300 and 3600 years ago i.e. 1600 to 300 BCE.

This date corresponds to the late Indus Valley Culture (1500 BCE) and the historical period (600 BCE), a period known as the Painted Grey Ware Culture, an Iron Age Culture of North India lasting roughly from 1200 BCE to 600 BCE. According to “The Painted Grey Ware Culture of the Iron Age” by BB Lal, the period has been associated with the settlements at Hastinapura and the 5 villages which the Pandavas asked from the Kauravas in the epic Mahabharata.

Dr Nanditha Krishna, based on her 4-month study and interpretation of the images of the terracotta told WION, “We see four horses in a war chariot, the art of managing horses was fairly well developed by this time, till now we do not have horses belonging to 1,   000 BCE, we don’t see horses in any kind of art. It has a spoked wheel, which is described in the Rig Veda, which means that the Mahabharata also uses the same spoked wheel. All these inferences link it to the Mahabharata age.”

Speaking of the possible identity of the two men on the chariot, she said, “Many people in the Mahabharata are said to have driven four-horse chariots, but only Arjuna’s four horses are given specific names and have an identity of their own. When I saw it, the first thing I thought was- this is Krishna and Arjuna. The general picture of ‘Gitopadesham’ is that of Krishna holding the horses and Arjuna pointing to his grandfather and his cousins and refusing to fight them.”

However, the observations also note that since Krishna chose not to fight, the second quiver of arrows could not belong to him. One of the reasons stated is that Arjuna- the world’s greatest archer, may need more than one quiver of arrows for a day of battle.

Another possibility is mentioned as, when Arjuna asks Krishna what he would do if Arjuna is killed in battle, Krishna says, “maybe the fire will become cold, but if it happens, I will take up my weapons and kill Karna and Salya”. So, maybe Krishna had his weapons with him “just in case”?

According to the observations, if the two figures are Arjuna and Krishna as suggested, this would be the earliest available portrayal of the ‘Gitopadesham’ scene of the Bhagwad Gita, going back to about 1,000 BCE. The two figures are also seen as wearing Harappa-style headbands. Thus raiding the question if the Mahabharata go into the late Harappan period?

What makes it even more interesting is that this observation, if, can be proved in other ways, would take the Bhagavad Gita and Mahabharata to a much earlier period than generally accepted.

“I have no doubt personally that this is Krishna and Arjuna, but I will agree with anyone who says that there is no inscription that says so. But why would you just have two people - one driving the chariot and another pointing in one direction, that’s only the ‘Gitopadesham’. Which makes the ‘Gitopadesham’, just on the basis of this tablet, a minimum of 1000BCE“ Dr. Nanditha Krishna told WION.