There is something fundamentally wrong, says Ram Madhav over Donald Trump's statement on mediation in Kashmir. 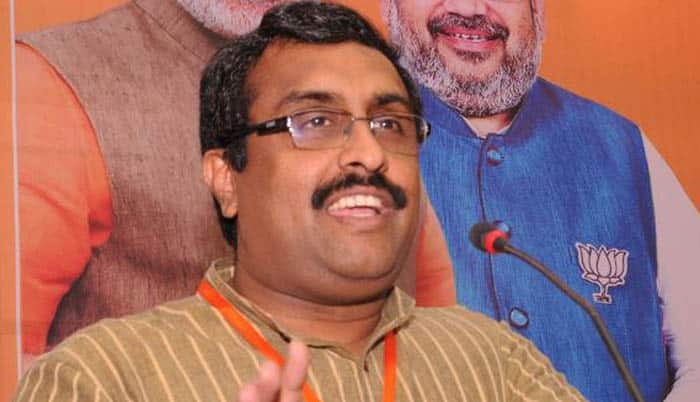 US President Donald Trump’s remark on mediation in Kashmir has not gone down well with India. After the Ministry of External Affairs categorically denied the US President’s claim that Prime Minister Narendra Modi had asked him for mediation, Bharatiya Janata Party (BJP) general secretary said that “there is something fundamentally wrong”.

Taking to microblogging site Twitter, Ram Madhav said that the statement by Trump “underscores the biggest problem” in the American “system”. According to Madhav, such statement should not come from the US President given the fact that there were experts of India and South Asia matters in his administration.

“POTUS’ statement on Kashmir underscores the biggest problem in the US system today. With expert India and South Asia hands like Lisa Curtis in White House n State Dept if he makes such a statement then there is something fundamentally wrong,” tweeted the BJP general secretary.

POTUS’ statement on Kashmir underscores the biggest problem in the US system today. With expert India and South Asia hands like Lisa Curtis in White House n State Dept if he makes such a statement then there is something fundamentally wrong. https://t.co/3PAfq5QDJ9

Not just in India, the statement by Trump during the joint press meet with Pakistan Prime Minister Imran Khan irked many in the US as well.

Another US Congressman, Brad Sherman, apologised to the Indian Ambassador, terming Trump’s statement as “amateurish and embarrassing mistake”. Posting a tweet, Sherman said, “I just apologized to Indian Ambassador Harsh Vardhan Shringla for Trump`s amateurish and embarrassing mistake," he tweeted on Monday...Everyone who knows anything about foreign policy in South Asia knows that India consistently opposes third-party mediation re Kashmir (sic). Everyone knows PM Modi would never suggest such a thing. Trump`s statement is amateurish and delusional. And embarrassing.”

The US State Department also went in a damage-control mode following Trump’s remark. A statement released by its spokesperson said that “Kashmir is a bilateral issue for both India and Pakistan to discuss”. The spokesperson, however, added that “the United States stands ready to assist”.

In a joint press briefing with Imran Khan, the US President had earlier said, "I was with Prime Minister Modi two weeks ago and we talked about this subject and he actually said 'Would you like to be a mediator or arbitrator', I said 'Where', He said 'Kashmir'. Because this has been going on for many, many years... I think they would like to see it resolved and you (Imran Khan) would like to see it resolved. If I can help, I would love to be a mediator."

As per the Shimla Agreement, both sides have agreed on 'mutual commitment to the peaceful resolution of all issues through direct bilateral engagements', which suggests that no third-party mediation should be entertained on issues like Kashmir.

What is Shimla Agreement