Don't be content with a silver medal, aim for gold next time: Amit Shah to Mirabai Chanu

Mirabai Chanu had clinched a silver medal in the 49kg category weightlifting that opened India's account at the recently-concluded Tokyo Olympics. 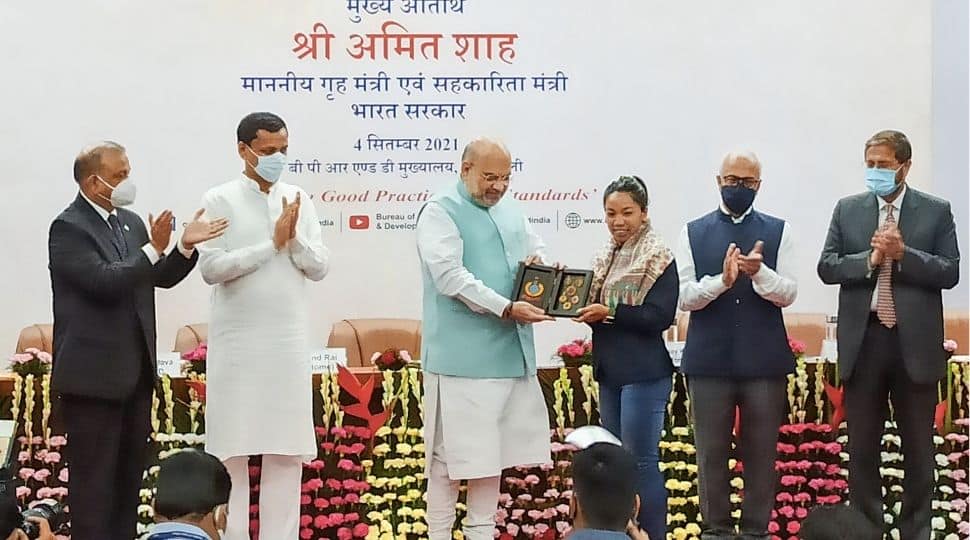 New Delhi: Union Home Minister Amit Shah on Saturday (August 4) felicitated Olympic medallist Mirabai Chanu here for bringing laurels to the country in weightlifting and exhorted her not to be content with the silver medal and to aim for gold next time.

The 27-year-old sportsperson, appointed as an additional superintendent of police in her home state Manipur after the recent win at the summer games, was honoured during the 51st Raising Day celebrations of the Bureau of Police Research and Development (BPR&D), a central government think tank. Shah presented the athlete with a shawl and memento.

He said Chanu brought honour for the country by winning a medal at the Tokyo Olympic games and is now a proud member of the police force.

"I thank her for her hardwork and dedication," the home minister added. "When I met her on the stage to honour her, I wished her success. Everyone, from the prime minister of the country to the common man, has applauded her and rejoiced in her victory."

"I want to tell her that she should not be content with a silver medal but should now aim for a gold. The entire country is waiting for it," Shah said.

He acknowledged the "struggles" undertaken by Chanu mentioning that she used to take "lift" in trucks to reach the place where she trained. Shah said much more needed to be done for athletes in terms of providing them facilities.

The BPR&D had earlier said that this honour for the Olympic winner was "a small gesture to welcome her to the fraternity on behalf of the Indian police."

Chanu had clinched a silver medal in the 49kg category weightlifting that opened India's account at the recently-concluded Tokyo Olympics. India won a total of seven medals at these games.

The home minister also gave away trophies and medals for excellence in training to winner states/union territories and central police organisations and forces, and seven authors who wrote on policing subjects in Hindi.

The BPR&D, an organisation under the Ministry of Home Affairs, was founded in August 1970.