Thackeray, who stepped inside the ED offices at Ballard Pier in south Mumbai around 11.15 am, finally stepped out at 8.15 pm, even as his wife Sharmila, daughter Urvashi, and son Amit waited outside to receive him. 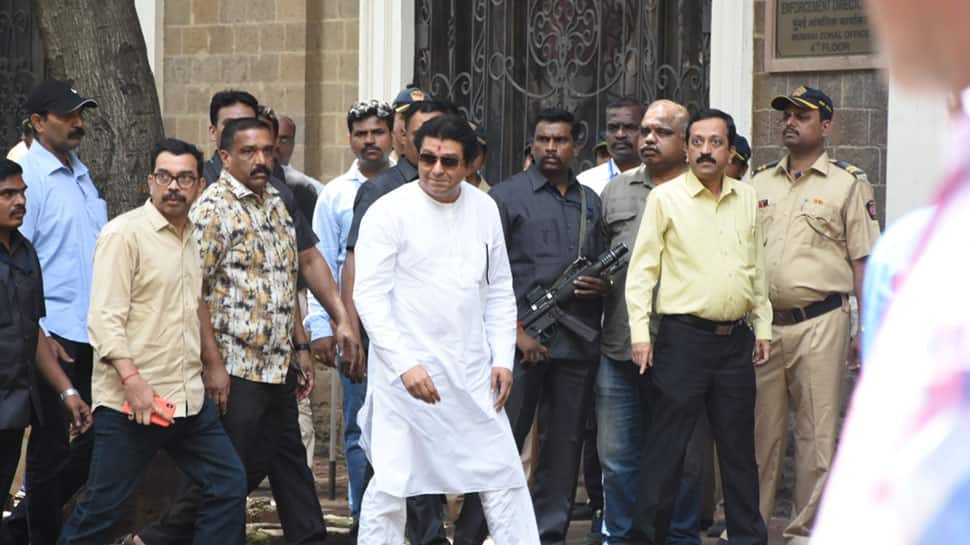 Mumbai: The Enforcement Directorate (ED) on Thursday grilled Maharashtra Navnirman Sena (MNS) chief Raj Thackeray for over eight hours in a decade-old money-laundering case involving realty deals and IL&FS. Thackeray, who stepped inside the ED offices at Ballard Pier in south Mumbai around 11.15 am, finally stepped out at 8.15 pm, even as his wife Sharmila, daughter Urvashi, and son Amit waited outside to receive him.

Looking weary and grim, Thackeray calmly walked out of the ED, waved once to the crowds, stepped inside his car without interacting with anybody, and drove to his home near Shivaji Park. Party office-bearers said it is not immediately clear whether he would be summoned again in the matter or this was the last meeting with the ED.

Thackeray was provided with a police escort with tight security en route his home and the ED office. While he was subjected to questioning by the ED, his family members waited at the nearby Grand Hotel.

Anticipating his release from the ED, around 6 pm, his family members were permitted to wait with their vehicle opposite the ED building, though other relatives, party workers and media were kept at bay throughout the day by the police.

Among other things, the ED is probing alleged irregularities pertaining to loans and equity investments worth over Rs 450 crore in IL&FS in the Kohinoor CTNL, a realty company, which is developing the posh Kohinoor Square Towers in the prime Dadar area.

The ED had slapped notices to Thackeray, his former business partners Unmesh Joshi - the son of ex-Lok Sabha Speaker Manohar Joshi, and Rajan Shirodkar, last Sunday, creating a flutter in political circles. While Joshi and Shirodkar have been grilled repeatedly by the ED earlier this week, it was Thackeray`s turn on Thursday.

The interrogation of Thackeray was reportedly to corroborate the statements and evidence provided by Joshi and Shirodkar, according to party leaders. However, as a frenzy built up among MNS activists all over the state with apprehensions of a law and order problem, Thackeray on Tuesday declared that he would "honour the ED summons" as he had always done in the past to court notices.

A day later (on Wednesday), he again issued an appeal to his followers not to go to the ED office or create any law and order problems whatever be the provocations.

The ruling ally, Shiv Sena, and all Maharashtra opposition parties like Congress, Nationalist Congress Party, Swabhimani Shetkari Sanghatana, Aam Aadmi Party and others have come out in support of Thackeray, terming the ED move as "vendetta and witch-hunting".

On Wednesday, Uddhav said he didn`t expect anything would come out of the ED questioning of his cousin. Not taking chances, the Mumbai Police imposed prohibitory orders in some pockets in the city, roadblocks, barricades, traffic diversions, along with large number of personnel and a dog squad.

The day started with a crackdown on several MNS activists, including party spokesperson Sandip Deshpande who was detained and later taken to the Shivaji Park Police Station, other activists were not allowed to leave their homes.

Strongly protesting his detention, Deshpande termed it as "high-handed action" by the police. Other activists protested silently by sporting black tee-shirts with the slogan "EDiot Hitler" and the `Swastika` symbol painted on them, as thousands of supporters came to Mumbai from all over Maharashtra to express solidarity with their party chief.

On Wednesday, the MNS activists were served police notices warning them against creating any law and order issues before Thackeray`s appearance before the ED.