Even Muslims have realised terrorism is an attempt to defame Islam, says Rajnath Singh

Asserting that security forces are giving a befitting reply to the terrorists, Union Home Minister Rajnath Singh on Sunday said even the Muslims have realised that terrorism is an attempt to defame Islam. 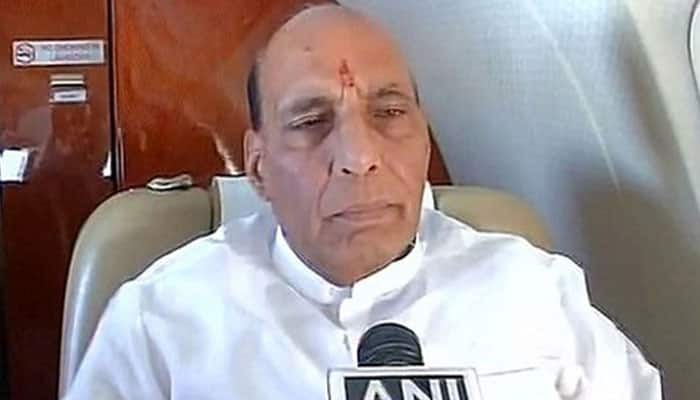 On Board: Asserting that security forces are giving a befitting reply to the terrorists, Union Home Minister Rajnath Singh on Sunday said even the Muslims have realised that terrorism is an attempt to defame Islam.

"The security forces are giving befitting reply to the terrorists. Even the Muslims have realised that terrorism is an attempt to defame Islam. The security forces are responding to terrorism in an appropriate manner. The entire country is united against terrorism," Singh told ANI enroute Kerala where he shall attend a programme organised by BKV to mark the Navathi celebration of senior leader P. Parameshwaran.

Asserting that Pakistan sponsored terrorists are using social media to gather crowds, Singh earlier on Friday urged the Kashmiri youth not to get influenced by them.
" Pakistan sponsored terrorists are trying to create panic in Jammu and Kashmir. They are trying to destabilize. We are replying in the same manner. There is a new trend to pelt stones on security forces during the anti-terror operations. They are being influenced by Pakistani forces. I appeal to them not to be influenced. Pakistan groups are using social media to gather crowd," he said.

Stating that terrorism is being dealt with the way it should be, Rajnath said India will be successful in this.

Jammu and Kashmir Director General of Police (DGP) S. P. Vaid yesterday alleged that Pakistan is responsible for instigating the youth of the Kashmir Valley to pelt stones during encounters.

"There is misuse of social media by the people, who are inimical to the peace of valley and our country. As the encounter starts, they start using social media, instigating young boys to reach the place of encounter and throw stones so that terrorists can get out of the spot. Some of these accounts have been traced across (Pakistan)," Vaid told ANI.

He said that the armed forces keep on changing their strategies to tackle the unrest in the valley, adding their experience of previous years helps them to handle the situation.