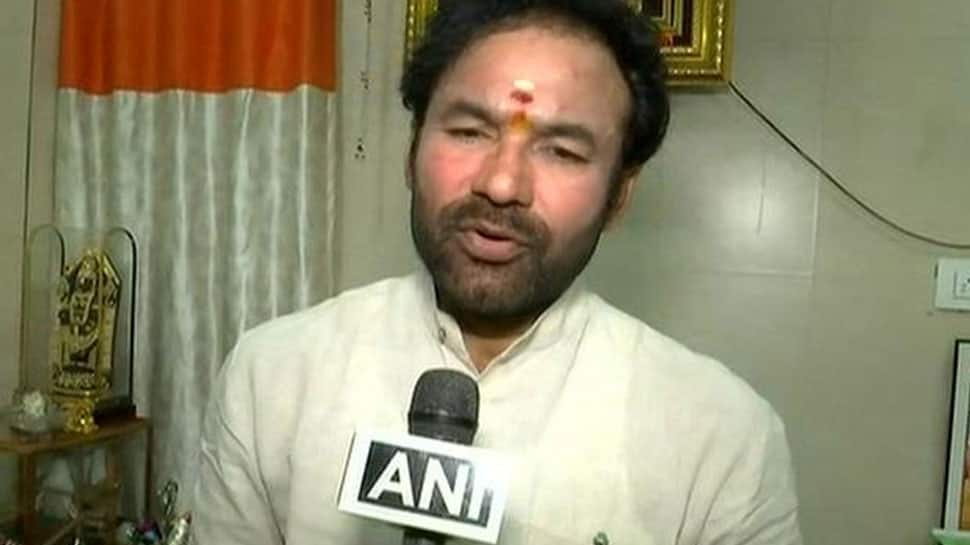 HYDERABAD: Telangana BJP leader G Kishan Reddy, who has been accused of being allegedly involved in the murder of at least 11 people in connection with EVM hacking, has attacked the Congress party for targeting him.

Speaking to news agency ANI, Reddy said, ''A man named Syed Shuja made allegations against me in London on Monday, in front of Congress leader Kapil Sibal, that my friends and I killed 11 people in Hyderabad. It was your (Congress) government then. Your officers were working at that time, how could I kill 11 people over EVM tampering issue?''

The Telangana BJP leader said that he has no criminal past and is known for his clean image.

GK Reddy, BJP: I don’t have a criminal record&I demand a high-level inquiry.If I could tamper with EVM I would've been Telangana CM. How did Congress win MP, Chhattisgarh&Rajasthan if EVMs were tampered with?Congress leaders committed murders in Telangana&Andhra,I’m not like them https://t.co/xXI2b3pNiu

Attacking the Congress party for unnecessarily dragging his name in the EVM hacking issue, Reddy said that if he could hack the EVMs, he would've been Telangana CM.

Reddy also demanded a high-level inquiry into the mater. He, instead, alleged that Congress leaders were behind the elimination of several political leaders in Telangana and Andhra Pradesh.

''I don’t have a criminal record and I demand a high-level inquiry. If I could tamper with EVMs, I would've been Telangana CM. How did Congress win MP,  Chhattisgarh and Rajasthan if EVMs were tampered with? Congress leaders committed murders in Telangana and Andhra, I’m not like them,'' Reddy said.

Senior BJP leader and Finance Minister Arun Jaitley also lashed out at Congress and rubbished all allegations of EVM hacking.

“After Rafale, the non-existent loan waiver to 15 industrialists – the next big lie – EVM hacking,” wrote the Finance Minister on his social media accounts on Monday.

Jaitley's comments come in the backdrop of an Indian cyber expert, who is seeking political asylum in the US, claiming that the 2014 general election was "rigged" through EVMs, which are prone to hacking, according to news agency PTI.

Jaitley, who is currently in the US for a medical check-up relating to his kidney ailment, will return India to present the Interim Budget, scheduled for February 1.

Earlier on Monday, the Election Commission of India clarified that the EVMs can’t be tampered with, asserting that the machines are manufactured following “rigorous standard operating procedures.”

The poll body also took a strong note of London-based event that demonstrated how EVMs used in India could be tampered with, terming it a “motivated slugfest”.

The poll panel on Tuesday ordered the Delhi Police to file an FIR against the alleged hacker Syed Shuja who claimed (at the event in London) that he was part of the EVM design team and can hack the EVMs used in elections in India.

(With Additional Inputs from PTI)