Punjab Chief Minister Amarinder Singh said, "We will be going to the Supreme Court. Agriculture is a state subject but farm bills have been passed without asking us. It is totally unconstitutional." 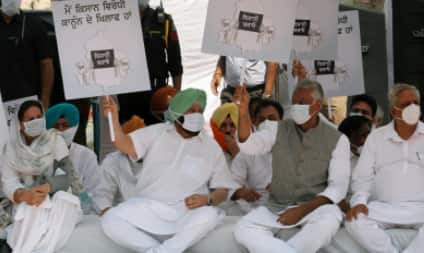 New Delhi: Punjab Chief Minister Amarinder Singh on Monday (September 28) said that his government would approach the Supreme Court over the issue of new farm laws because agriculture is a state subject. Slamming the BJP-led Central government, Chief Minister Captain Amarinder Singh said, "We will be going to the Supreme Court. Agriculture is a state subject but farm bills have been passed without asking us. It is totally unconstitutional."

Talking to reporters Khatkar Kalan, Singh asked, "Will it (Centre) leave anything with them to run their states." The Chief Minister, along with AICC general secretary and Punjab Affairs in-charge Harish Rawat, Punjab Congress chief Sunil Jakhar and other leaders ton Monday paid tributes to Shaheed Bhagat Singh at Khatkar Kalan village. Amarinder Singh, Rawat and others held a sit-in protest here against the new farms laws.

Stating that his government would take every possible step to protect the interest of the farming community, he said, "Two advocates from Delhi are coming here tomorrow and we will discuss this matter with them."

In Uttar Pradesh today, UPCC president Ajay Kumar Lallu and other party workers were held while staging protest against the new farm laws in Lucknow.

Led by the UPCC president, Congress workers from all over the state converged at the Parivartan Chowk here and staged a protest against the "anti-farm" laws, party's media convenor Lalan Kumar told media persons, adding that the party workers and its chief were held, wWhile trying to move towards the Raj Bhawan.

There are reports from some districts that party workers, who were on their way to Lucknow to take part in the programme, were detained and not allowed to proceed, Lalan claimed.

The workers raised slogans against the new laws and said party would force the government to take them back, Lalan said.
President Ram Nath Kovind on Sunday gave assent to three contentious farm bills passed in Parliament last week that have triggered farmers' protest in some states.

Protests in Karnataka against amendments to APMC, land reforms act

Meanwhile, pro-farmer organisations backed by a number of other social and political outfits staged protests across Karnataka over the amendments to the APMC and land reforms act in Katnataka on Monday.

The demonstrations were against two important amendments to the Karnataka Land Reforms Act and the Agricultural Produce Marketing Committee Act passed by the Karnataka Assembly despite strong objection by the opposition parties, mainly the Congress and JD(S).

The repeal of certain provisions in the APMC Act through an amendment allows private players to directly purchase agriculture produce from farmers, which was prohibited earlier.

The protesters alleged that these laws will ruin the agriculture sector as people with moneybags will purchase agricultural land to convert their black money into white and turn agriculture land into real estate business.

The farmers alleged that the amendment to the APMC Act will deprive them of the minimum support price and enable multinational companies and big corporate houses to directly procure produce at their rates.

The call for a bandh given by the Karnataka Raitha Sangha (Karnataka Farmers' Association) and other farmer organisations is supported by the Congress, JD(S), Karnataka Rakshana Vedike (KRV) and the Left parties.

Ignoring the coronavirus fear, farmers came on the roads in groups, raised slogans, took out bike rallies, burnt tyres in protest on the road and staged sit-in demonstrations. At many places, the demonstrators courted arrest.

In Bengaluru, farmers and KRV members including its chief T A Narayana Gowda took out a rally and tried to stop buses when they were arrested. Protests were held at various places including Mysuru Bank circle, Town Hall, Yelahanka and Ballari Road in the city.

The Congress, which has extended support to the protests, said it will stage a demonstration in front of its office on Race Course Road in Bengaluru.

Earlier on Sunday, Chief Minister B S Yediyurappa had appealed to the protestors not to create unnecessary confusion over the amendments. Stating that he had spoken to leaders of farmers organisations, Yediyurappa said his government's stand and the expectations of the Prime Minister were in favour of the farmers.

According to a gazette notification, the president gave assent to three bills -- the Farmers' Produce Trade and Commerce (Promotion and Facilitation) Bill, 2020, the Farmers (Empowerment and Protection) Agreement of Price Assurance and Farm Services Bill, 2020, and the Essential Commodities (Amendment) Bill, 2020.