Galtan Singh was rushed to a nearby hospital where the doctors declared him brought dead. The body has been sent to his village. 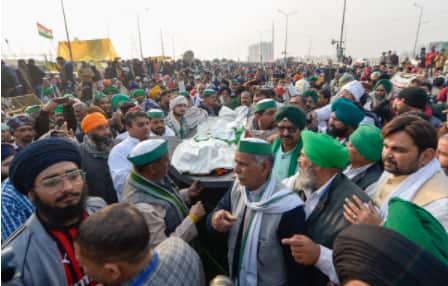 Galtan Singh was rushed to a nearby hospital where the doctors declared him brought dead. Indirapuram DSP Anshu Jain told PTI that as per medical information, the farmer died of a heart attack. The body has been sent to his village.

Commenting on Galtan Singh's death, the state president of the BKU, Rajbir Singh, reportedly said that all those farmers who died during the protest against the farm laws must get the status of a martyr.

Galtan Singh's body was wrapped in a BKU flag, and BKU leader Rakesh Tikait paid homage to him. A tribute was also paid to all farmers who died during the protest on the eve of the New Year. The BKU also took out a candlelight march.

Bharatiya Kisan Union (Lakhowal) General Secretary Harinder Singh Lakhowal told IANS, "The farmers have been protesting at the bordering areas of the National Capital since November 26, 2020 and the death toll of farmers has reached 43 since then."

Farmers` protest is going on at Singhu border, Tikri border and Ghazipur border amid severe cold conditions in Delhi and NCR. The next round of talks between the Centre and farmer unions is slated on January 4.