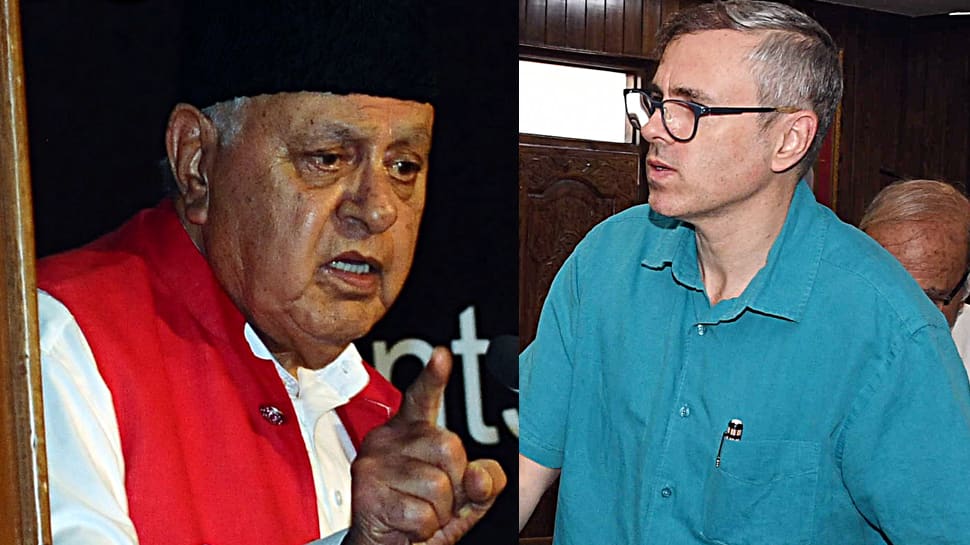 National Conference (NC) president and former chief minister of Jammu and Kashmir Farooq Abdullah along with party leader Omar Abdullah on Thursday met Prime Minister Narendra Modi to discuss the current situation in the state. They were accompanied by party leader Hasnain Masoodi.

PM Modi was also apprised that the state has been without an elected government for more than a year now and the NC president requested the PM to take all necessary steps to facilitate the Election Commission's (EC) conduct of assembly polls before winters.

Praising the meeting, Omar said that it was conducted in a very cordial atmosphere. He also expressed their gratefulness to PM Modi for meeting them.

"I accompanied NC President Dr Farooq Abdullah & Hon MP Justice Masoodi to a meeting with PM Modi this morning. During the course of the meeting, we briefed PM Modi about our assessment of the current situation in the state. We requested him that no precipitous steps of any sort should be taken that may result in a situation in the state, particularly the valley, worsening. We specifically asked him to let subjudice matters be settled by the courts & other matters be settled by an elected government," tweeted Omar.

"Dr Abdullah reminded the PM that J&K has been without an elected government for well over a year now and requested him to take all necessary steps to facilitate the EC’s conduct of assembly polls before the onset of winter. The meeting took place in a very cordial atmosphere & we are grateful to PM Modi for meeting with us today," further tweeted Omar.

"Retweeting this tweet of mine from a few days ago to put into perspective the meeting of NC lead by Farooq Abdullah with
PM Modi. We have been maintaining that any ‘all-party meeting’ would only follow on from our meeting with the PM," tweeted Omar.

Earlier on Monday, the NC had given a notice to raise the situation of the state in the Lok Sabha and also sought an appointment with PM Modi. Following this, Omar had said, "Before calling senior leaders from other parties in J&K to discuss the current situation it’s important to try to understand from the Central Govt about their intentions for the state & also how they see the situation at the moment. This is what NC is focused on."

The meeting comes days after in a major strategic move aimed at further bolstering the ongoing counter-terror operations in the state, the Centre decided to deploy additional 10,000 troops in the state. The decision followed the visit of National Security Advisor (NSA) Ajit Doval during which he reviewed the law and order situation in the state. It may be recalled that J&K continues to remain under the President's Rule.