Fear of poaching returns to Sunderbans after Tiger's mysterious death

There has not been a single instance of poaching in Sunderbands in the last decade. The caracass of a Tiger found recently, however, has cast a shadow on an exemplary statistic. 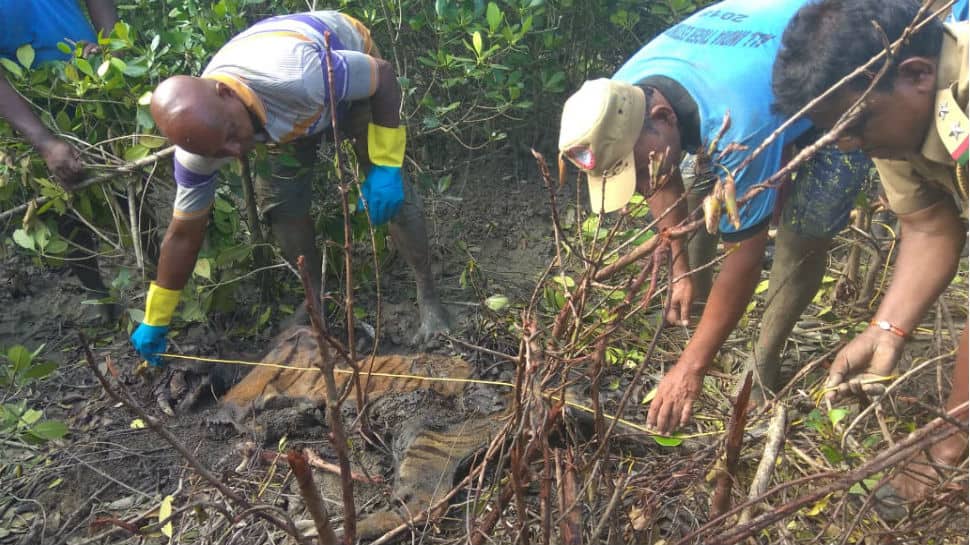 Shadow of poaching returned to Sunderbans following the recovery of a Tiger carcass in Sunderban biosphere reserve area.

The decomposed carcass of a full-grown Royal Bengal Tiger was found in Ajmalmari on Monday. The foresters from Kultali beat office found the carcass following a local tip-off.  The body was almost decomposed although the teeth, skin and claws were found intact.

The body was sent for autopsy to ascertain the actual cause of death and was burnt subsequently following the NTCA guidelines.

Chief Wildlife Warden (WB) Ravi Kant Sinha confirmed the report though he did not want to comment on the cause of death until the autopsy report is ready.

Though the forest officials are claiming that it's not a case of poaching, circumstantial evidence indicates foul play.

A deer trap was found at the place of occurance.

Local sources claim that there was iron wire stuck in the Tiger's stomach. Apparently, the Tiger died some 15-20 days back.

Such evidence have brought back the fear of poaching after more than a decade.

The last case of Tiger poaching in the Indian part of Sunderbans was recorded in October 2008. In the last decade, Sunderbans has earned recognition for its Tiger management.

Forest department took several measures to curb man-animal conflict in Sunderbans.  The villagers were taken into confidence in tackling such issues.  There are instances where the poachers have been brainwashed,  trained and turned into personnel who work towards Tiger conservation.

Monday's carcass recovery, however, has become a new worry for the foresters and Tiger experts.

Though forest officials claim that no Tiger trap was found,  the presence of a deer trap is clearly indicating that poaching attempt was very much there.  Perhaps the Tiger has fallen prey to it.

The top officials of SBR rushed to the spot and started the investigation.