There was a palpable buzz at the Baltal base camp from where the first batch of pilgrims set off for the holy shrine. 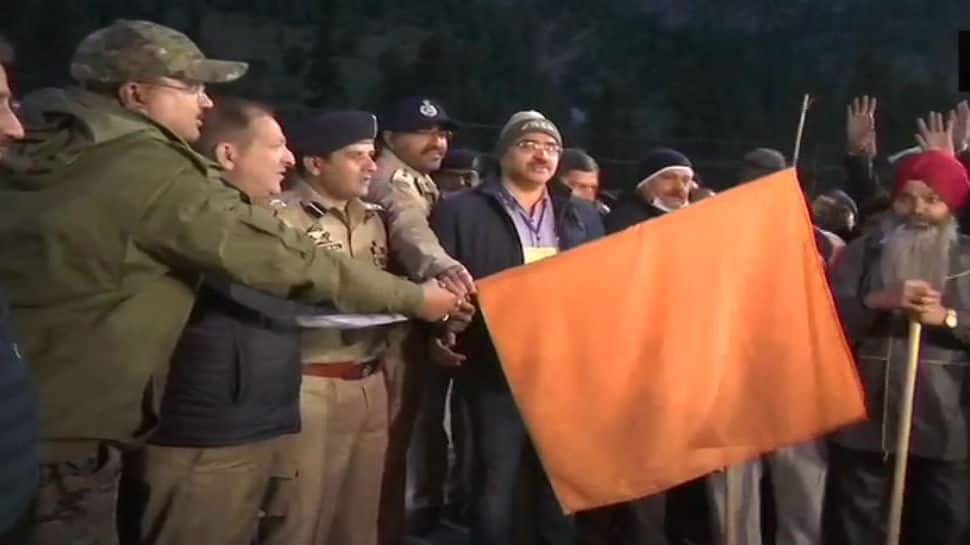 The first batch of pilgrims for the Amarnath Yatra set off from the Baltal base camp in the early hours of Monday morning in what would be a 45-day journey towards the cave shrine. Security measures in place this year is tighter than ever before with close to 60,000 personnel deployed on the two routes.

There was a palpable buzz at the Baltal base camp from where the first batch of pilgrims set off for the holy shrine. Chanting 'Bam Bam Bhole', the pilgrims set off for the shrine which is situated at a height of 3,880 meters. Authorities here say that every measure has been taken to ensure that the safety and convenience of the pilgrims. While the Central Reserve Police Force and J&K Police have been given most of the responsibility for providing security cover, the Indian Army and Border Security Force too have been part of the entire planning exercise.

Jammu and Kashmir: First batch of pilgrims enroute Amarnath cave shrine, after the batch was flagged off from Baltal base camp, this morning. #AmarnathYatra pic.twitter.com/GCO2TiQ5AP

Apart from thousands of security personnel all along the two routes, drones and CCTV cameras are also being used to monitor proceedings. Vehicles have been fitted with Radio Frequency Identification (RFID) tags so that their exact locations can be known at all times. Ravideep Sahai, IG, CRPF, had told Zee News a day earlier that no stone has been left unturned to ensure the Amarnath Yatra is peaceful this year. ""The Yatra is a big event for us. A detailed security plan has been made for it," he had said. "The Indian Army, BSF, Police and CRPF have combined for the security arrangements which have been put in place. We will provide vigil day and night to ensure that pilgrims face no trouble or threat."

Apart from security concerns, there are also weather-related updates that are being regularly checked and will be passed on to pilgrims. A mobile application was launched recently which promises to ensure timely updates. Due to monsoon rains, emergency teams have been deployed at various points along the two routes and these can quickly reach any particular point where they may be needed in case of any unfortunate developments.

Locals have once again been urged to extend maximum cooperation and several points along the two routes have been designated as places where pilgrims would be able to take rest and eat before making their onward journey.