Amid the grim flood situation in Himachal, Punjab, Uttarakhand, Haryana and Delhi, the Cabinet Secretary chaired the National Crisis Management Committee (NCMC) meeting to review the rescue and rehabilitation work. 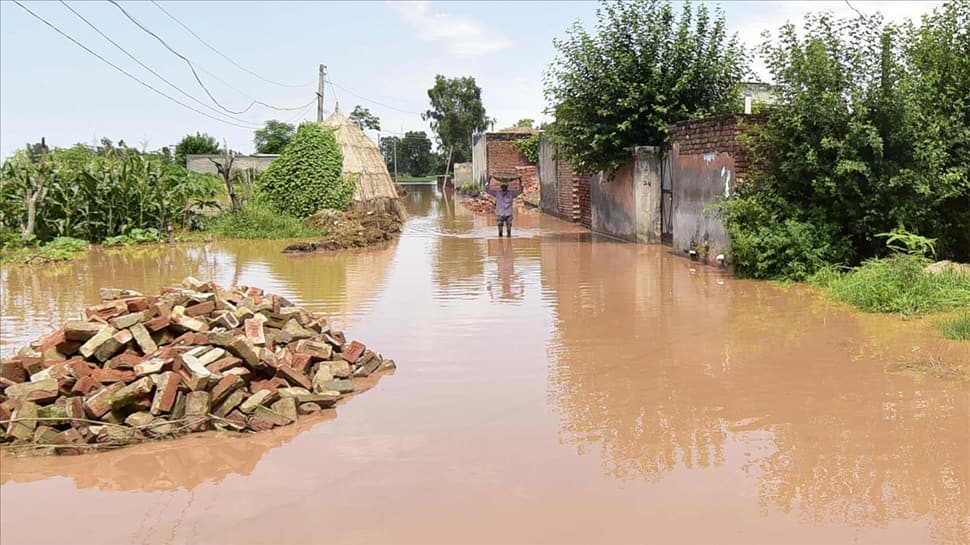 A view of the flood affected Ludhiana in Punjab. (Photo: IANS)

NEW DELHI: The Punjab government declared a 'natural calamity' over the flood situation in the affected villages of the state. Chief Minister Amarinder Singh announced Rs 100 crore for emergency relief and rehabilitation measures in the flood-hit regions and directed the Financial Commissioner Revenue to issue the necessary notification at the earliest.

“National calamity has been declared in flood hit villages of Punjab. Have asked Financial Commissioner Revenue to issue notification for the same at the earliest. Have also directed Finance Department to release pending compensation to farmers against previous crop losses,” tweeted Singh.

National calamity has been declared in flood hit villages of Punjab. Have asked Financial Commissioner Revenue to issue notification for the same at the earliest. Have also directed Finance Department to release pending compensation to farmers against previous crop losses.

Singh, who earlier travelled by road from Chandigarh to Ropar, described the situation as unprecedented and assured of all possible assistance from his government to the residents.

Amid the grim flood situation in Punjab, Himachal Pradesh, Uttarakhand, Haryana and Delhi, the Cabinet Secretary Tuesday chaired the National Crisis Management Committee (NCMC) meeting to review the rescue and rehabilitation work. Twenty-eight teams of the National Disaster Response Force (NDRF) have deployed in the five states. Resources from the Army and IAF have also been pressed into service.

Delhi-NCR is on high alert after Yamuna river crossed the danger level mark and was recorded at 206.12 metres at 2 pm Tuesday as against the danger level mark of 205.33 metres. Water level above 207.500 metres refers to an imminent flood situation. Around 21,000 people have been evacuated from low-lying areas close to the river in Delhi and have been taken to 1100 relief camps which have been set up. Another 1120 such camps are also being prepared. Medical checks are being conducted. Thirteen drones have been launched to keep an eye on the situation.

The death toll in the flood-ravaged Himachal Pradesh climbed to 43 on Monday. "The rainfall following in the past three days has caused an estimated 574 crores of destruction in various parts of the state. In the last 24 hours, 22 people have lost their lives. In total, 43 people have lost their lives by the rains in this monsoon season which is a very serious matter of concern. The administration is equipped with all the resources and prepared to tackle the situation. I pray that no more casualty or destruction happens in the coming days," state CM Jai Ram Thakur told ANI.

The National Highway 3 between Manali and Leh was blocked for traffic movement near Rohtang due to a landslide triggered by relentless rains in the region on Tuesday morning. At least 300 people are still stranded in remote areas in Lahaul and Spiti district.

The death toll due to cloudburst in Arakot village of Uttarkashi rose to 17 as personnel of State Disaster Response Force (SDRF) launched an operation to rescue people stranded in the affected area on Monday.

The situation is expected to further worsen after the Indian Meteorological Department (IMD) predicted widespread rainfall over northwestern parts of India during for next five days.

Centre has been taking stock of the current situation, preparedness, rescue and relief operations and directed that immediate assistance, as sought by the states, be provided to meet the crisis.

Meanwhile, the situation marginally improved in southern India with floodwater receding in several states. The death toll in Kerala touched 122 on Tuesday with at least 21 still missing across the rain-ravaged state and 40 were injured. Malappuram was the worst affected district with 58 people losing their lives.

States of Karnataka, Maharashtra and Gujarat have has been severely affected by floodwaters with over 100 people dead. While rain has abated, rescue and relief operations continue. A major reason for several districts of Karnataka flooding is believed to be Maharashtra opening its dams to release water. CM BS Yediyurappa also met Maharashtra CM Devendra Fadnavis earlier this month and asked him to control the outflow of water from dams in his state.

Other states like Odisha, Assam and Bihar grappled against floods last month and are now slowly recovering.