For ease in availability of FASTag, NHAI has also launched MyFASTag APP to provide all information regarding the FASTag.

New Delhi: The central government on Friday (November 29) has extended the deadline for the mandatory FASTag roll out date of December 1 to December 15.

According to a government statement, "It has been found that many citizens have still not enabled their vehicles with FASTag due to various reasons. Accordingly, to provide some more time to citizens to buy and put FASTag on their vehicles, it has now been decided that charging of double user fee from vehicles which enter FASTag lane without FASTag will start from 15th December instead of 1st December."

The statement further said, "In order to save fuel, time and pollution and to ensure seamless movement of traffic, Ministry of Road Transport and Highways, Government of India, has launched National Electronic Toll Collection program (NETC) which provide for the collection of user fee through FASTag based on RFID technology."

Under the new provision, the government decided that all lanes (except one lane on each side) in fee plazas shall be declared as `FASTag lane of Fee Plaza` by December 1, 2019. Accordingly, the National Highways Authority of India (NHAI) has equipped all fee plazas with Electronic Toll Collection System.

For ease in availability of FASTag, NHAI has also launched MyFASTag APP to provide all information regarding FASTag. 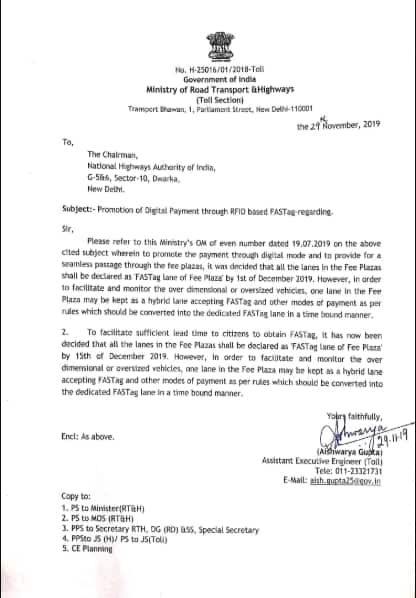 The idea behind switching to an electronic toll collection mechanism like FASTag for private or commercial vehicles was to reduce waiting times at toll plazas on the national highways and keep traffic moving.

Notably, the average daily issuance of FASTag has increased by 330 per cent from 8,000 in July to 35,000 Tags sold in November 2019. After the announcement of the waiver of Tag cost from 21st November, there has been a growth in FASTag issuance of over 130 per cent. FASTag is accepted on 560+ Toll Plazas and a number of plazas are getting added on a daily basis.

The NHAI had introduced electronic toll collection through FASTag across the country back in 2014, but it was an optional system. Toll plazas had separate lanes dedicated to tag users, but the system wasn’t quite effective, therefore, the government has now decided to make FASTag mandatory from December 15.