Government is taking series of steps to improve income of farmers: PM Modi 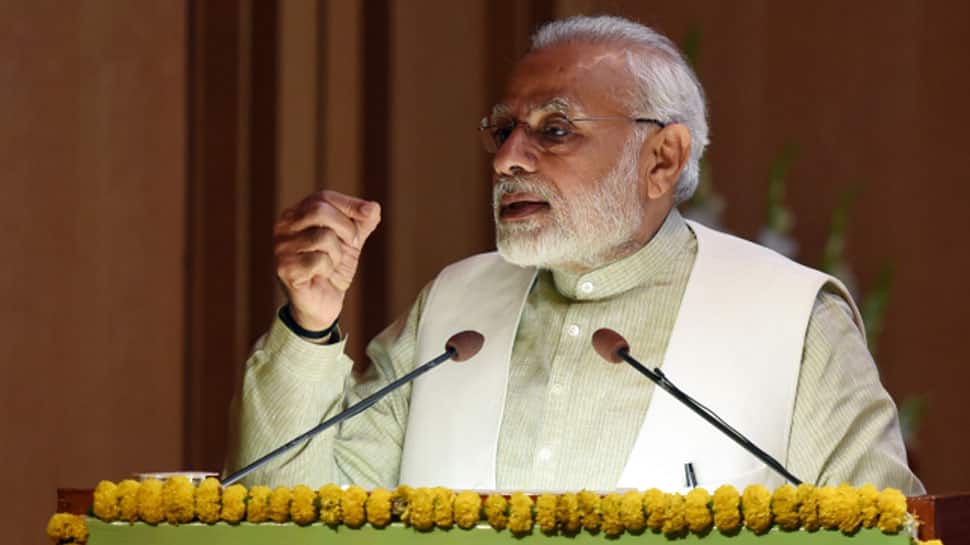 New Delhi: Prime Minister Narendra Modi on Tuesday said that his government will seriously look into suggestions made for increasing farmers' income and the Niti Aayog will chalk out an actionable plan.

Addressing a conference on 'doubling farm income by 2022', PM Modi said, "Your recommendations will be analysed at every level in the government. Some may be implemented in a short-term, while some will be implemented later. I desire to take these (recommendations) forward."

The Niti Aayog will come out with actionable points after coordinating with the ministry concerned on the recommendations, he added.

The PM also called for separate efforts to come out of traditional methods of farming and even suggested agri varsities to hold hackathons to evolve solutions to the problems facing the farm sector.

Asserting that the government is changing the way agriculture sector operates, he said efforts are being made to build a new culture that will empower farmers. In this regard, PM Modi mentioned four aspects - reducing input costs, ensuring a fair price for the produce, reducing wastage and creating alternate sources of income.

Highlighting steps taken to transform the entire agri ecosystem, he said 100 percent neem coating of urea has led to an increased efficiency of the urea itself, while also increasing productivity.

PM Modi further said that as many as 99 irrigation schemes that had been stuck for 2-3 decades will be completed within a specified time-frame and Rs 80,000 crore has been allocated for the same. Half of these schemes would be completed by this year-end and remaining in the next year, he added.

In the Budget 2018-19, 'Operation Greens' has been announced to augment farm supply chain that will help cultivation of tomato, onion and potato, PM Modi said. He went on to says that 22,000 rural markets would be upgraded so as to provide a market for farm produce within 5-15 km distance of production points.

Over the last two days, farmers, agriculture scientists and officials came together for an insightful national conference on doubling farmers’ incomes. I was delighted to attend the conference today and address it. Here is my speech. https://t.co/SZb3Z2g74j

At the conference on doubling farmers’ incomes, there were detailed presentations on various subjects relating to agriculture and farmer welfare. The suggestions shared will surely help the sector.

Talked about the steps being taken by the Government of India to improve farmers’ incomes. This includes efforts towards reducing input costs, ensuring a fair price for the produce, reducing wastage and creating alternate sources of income.

Spoke about how ‘Operation Greens’ will benefit farmers growing tomato, onion and potato. The Central Government is ensuring better connectivity for farmers to markets and working towards easier availability of credit for them.

The government, he said, is also encouraging Farmer Producer Organisation. Also, the provision for agri-credit has been raised to Rs 11 lakh crore from Rs 8 lakh crore, the PM said.

Shifting of agri-marketing to concurrent list, digitalisation of land records, GST reduction on products made from agri-waste, setting up rural business hubs, improving export infrastructure, setting up of green logistics for perishables at airports/ports, real market information to farmers to plan sowing are some of the suggestions emanated from the two-day conference.