The India Meteorological Department (IMD) on Monday (July 28) issued an alert for heavy rainfall in the national capital on July 29 and 30. 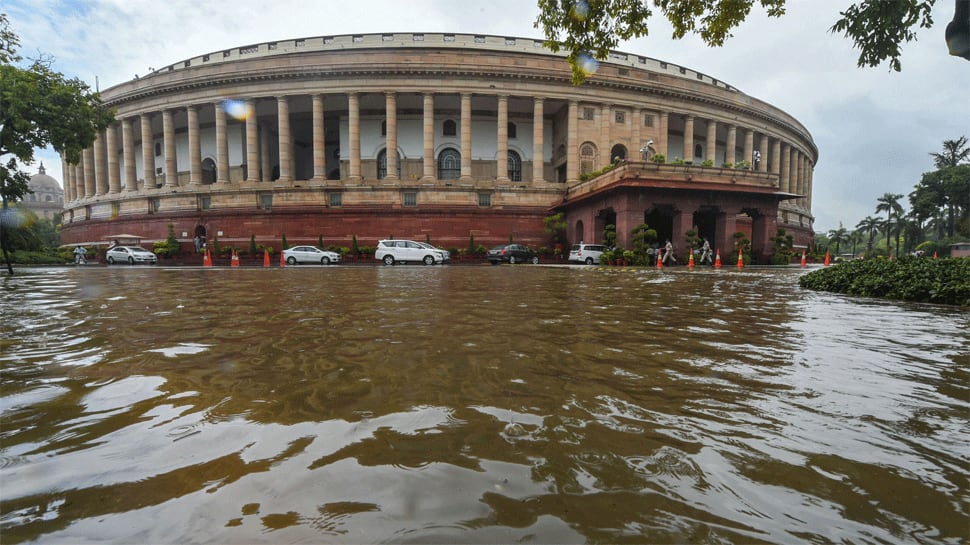 Waterlogging in premises of Parliament House after heavy rains on July 22. (PTI photo)
Share:
Edited By:

New Delhi: The India Meteorological Department (IMD) on Monday (July 28) issued an alert for heavy rainfall in the national capital on July 29 and 30.

In an advisory, the IMD said the heavy rainfall can cause waterlogging in low-lying areas and roads, leading to disruption to traffic flow and municipal services such as water supply and electricity.

"Delhi-NCR is very likely to experience moderate rain with one or two spells of heavy rainfall (more than 65 mm) during the evenings of July 29 and July 30," it said.

Kuldeep Srivastava, the head of the IMD's regional forecasting centre, said, "At present, the monsoon trough is running close to the foothills of the Himalayas. It will start shifting southwards on Tuesday. It will be close to Delhi-NCR from Tuesday evening to Thursday."

"Under the influence of these systems, heavy to very heavy rainfall will occur over these areas," he said.

According to the IMD data, the Safdarjung Observatory, which provides representative figures for the city, has recorded 226.8 mm rainfall in July so far, which is 24 per cent more than the normal of 183.5 mm.

The Lodhi Road weather station has recorded 36 per cent surplus precipitation -- 250 mm against the normal of 183.5 mm.

However, since June 1, when the monsoon season begins, the city has recorded 182.7 mm rainfall against the normal of 232.9 mm, a deficiency of 22 per cent.

At least four persons have died in rain-related incidents.

The monsoon reached Delhi on June 25, two days earlier than the usual date of June 27. Despite that, the rains had remained subdued in the city in the absence of a strong supportive weather system such as moisture-laden easterly winds from the Bay of Bengal.

Earlier, the IMD had predicted normal rainfall in the national capital during the season.