Security in several states sharing the border with Pakistan has been beefed up. 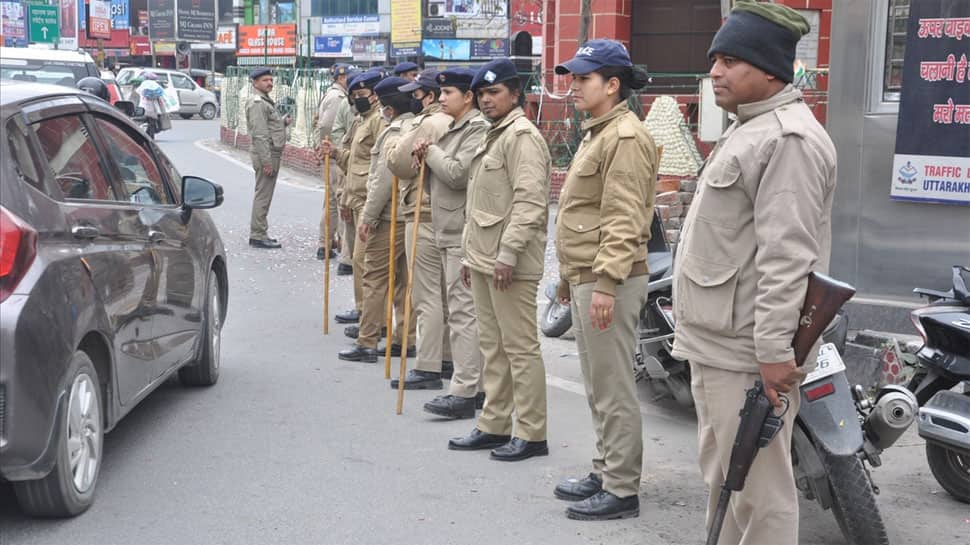 Security beefed up in Dehradun after Indian Air Force (IAF) jets hit the biggest training camp of the Jaish-e-Mohammed (JeM) group in Pakistan, eliminating a very large number of terrorists and their trainers on Feb 26, 2019. (Photo: IANS)
Share:
Written By:

The Western Naval Command also sounded a "high alert” and announced that it is “fully prepared" 24/7 to tackle any reaction from Pakistan.

Security in several states sharing the border with Pakistan has also been beefed up. Police in Gujarat, Punjab, Rajasthan, Himachal Pradesh and Maharashtra issued a "high alert" following the air strikes.

Punjab shares a 553-km long international border with Pakistan which is barbed wire fenced inside Indian territory. Chief Minister Amarinder Singh ordered several measures as part of the state`s preparedness to deal with any contingency in view of the latest developments at the LoC.

Border districts were put on high alert on Tuesday following the air strikes by the Indian Air Force (IAF) across the Line of Control, undertaken by India as a retaliatory measure for the February 14 Pulwama terror attack. Deputy Commissioners (DCs) and Senior Superintendents of Police (SSPs) of the border areas have been asked to put in place all contingency plans to ensure the protection and safety of the citizens. The Chief Minister is also expected to visit the border areas from Pathankot to Ferozepur by road on Wednesday, an official spokesperson announced after a high-level law and order review meeting, chaired by Amarinder Singh.

In Maharashtra, the state government asked the office bearers of the School & Cooperative Bus Owner’s Association to ensure the safety of school children keeping the prevailing situation in mind. Chief Minister Devendra Fadnavis informed that security has been tightened across the Mumbai, the financial capital of the country, and appealed to people not to panic.

Intelligence agencies have already asked Mumbai police to be on alert, and increase the vigilance and CCTV surveillance in public places, airport, railway stations, and other key locations. Mumbai has been one of the most preferred targets for terrorist organisations and has witnessed several terror attacks, including explosions in Mumbai suburban trains in July 2006, and the unprecedented attacks of 26 November 2008, when two prime hotels, a landmark train station, and a Jewish Chabad house were attacked.

Gujarat, which shares both land and sea border with the neighbouring country, was also put on high alert across the state after India's air strikes. The Indian Army shot down a Pakistani spy drone in Gujarat's Kutch, hours after the IAF's air strike on Tuesday.  The drone was shot down in Ambasa village, bordering Pakistan.

Gujarat Chief Minister Vijay Rupani chaired a high-level meeting to review the security situation in the state after IAF's air strikes on terror camps Pakistan as the state shares both land and sea border with the neighbouring country. Post the pre-dawn air strikes, orders were issued to step up vigil at public places and important sites like the Somnath Temple and the Statue of Unity, he said.
“The Army, IAF, BSF, Coast Guard, local police and all security establishments are coordinating things. They are on vigil and all arrangements have been made (for security)," said Rupani.

"In view of the action on terrorists across the border by IAF, all establishments have been put on high alert," a message from DGP's office to the district headquarters said.

In Rajasthan, joint security forces - including the Border Security Force (BSF), Army and IAF – are patrolling border areas. "The IAF fighter combats are patrolling western borders of the state. The border cities of Jaisalmer, Barmer, Bikaner and Shri Ganganagar have been kept on high alert," an official said, adding that a strict vigil has been being kept on activities in border villages.

Himachal Pradesh issued alert warnings to all district SPs, asking them to ensure the safety of vital installations and also to keep sharp vigil in their respective districts, state police spokesperson and SP (Law and Order) Khushhal Sharma said.

It has also been advised to pay more attention in communally sensitive localities and to ensure safety and security of Kashmiri people living in Himachal Pradesh, he said.

The Indian Air Force, in the early hours of Tuesday, carried out multiple aerial strikes at terror launch pads at various places in Pakistan-occupied Kashmir (PoK), completely destroying them, including control rooms of Jaish-e-Mohammed (JeM) terror group. The terror camps in Balakot, Chakothi and Muzaffarabad were struck by 12 Mirage 2000 jets with 1000 kg of explosives at around 3:30 am, IAF sources told ANI. India`s response came 12 days after a CRPF convoy was attacked by a suicide bomber in Jammu and Kashmir`s Pulwama, in which 40 security personnel were killed.